Long Beach, California—At the 2019 IEEE/CVF Conference on Computer Vision and Pattern Recognition (CVPR), the workshops provide a comprehensive forum on topics that the main conference—with its record-breaking attendance of 9,000 people—cannot fully explore during the week.

The workshops’ purpose is to encourage in-depth discussion of these technical and application issues. In the past few years, the workshop proposals have proved so popular and numerous that conference organizers have only been able to allow only 90.

Each workshop is a mini-conference, with its own paper submissions and proceedings, each independently organized by volunteers who work in academia or industry. The workshops feature a data set and then challenge participants to answer a particular problem in computer vision. Indeed, several of the workshops offered cash prizes to the best teams — including one with a total purse of $60,000 for six or so winning teams, funded by the U.S. government and industry.

At the heart of the workshops is an effort by industry and academia to size up the talent of participants—for possible recruitment as many contestants are close to graduation—or to get a snapshot of the state of the art, said Conference Finance Chair Walter Scheirer, also an assistant professor at the University of Notre Dame, who was among organizers for that $60,000 prize challenge workshop, entitled “Bridging the Gap Between Computational Photography and Visual Recognition.” Other contestants are from corporate labs.

Ultimately, the prize challenges at the workshops spur innovation in computer vision—or robots that can see.

What were the workshops about on Sunday and Monday? Here is a sampling of some of them. Not surprisingly, many of them drew overflowing audiences, with curious listeners standing in the doorway and spilling into the halls of the Long Beach Convention Center. 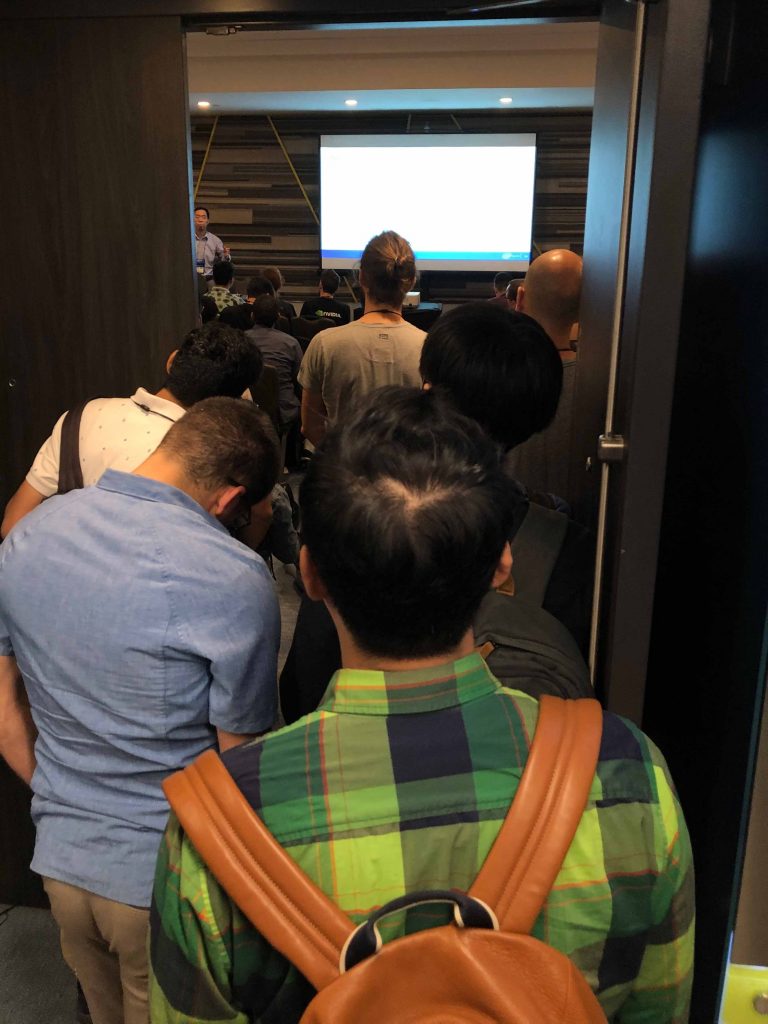 In this era of e-sports juggernauts, is it too surprising that a workshop entitled “Computer Vision in Sports” drew audiences that stood on their tiptoes in the hallway just to get a peek inside the packed conference room?

Fourteen papers were accepted to the workshop, ranging from “Early Detection of Injuries in MLB Pitchers from Video” to “GolfDB: A Video Database for Golf Swing Sequencing.”

Perhaps it was the organizers’ powerful pitch for the gathering that attracted such a turnout:

“Sports is said to be the social glue of society,” they wrote in their summary. “Computer vision has recently started to play an important role in sports as seen in for example football where computer vision-based graphics in real-time enhances different aspects of the game.

“Computer vision algorithms have a huge potential in many aspects of sports ranging from the automatic annotation of broadcast footage, through to better understanding of sports injuries, and enhanced viewing. So far the use of computer vision in sports has been scattered between different disciplines,” they added. 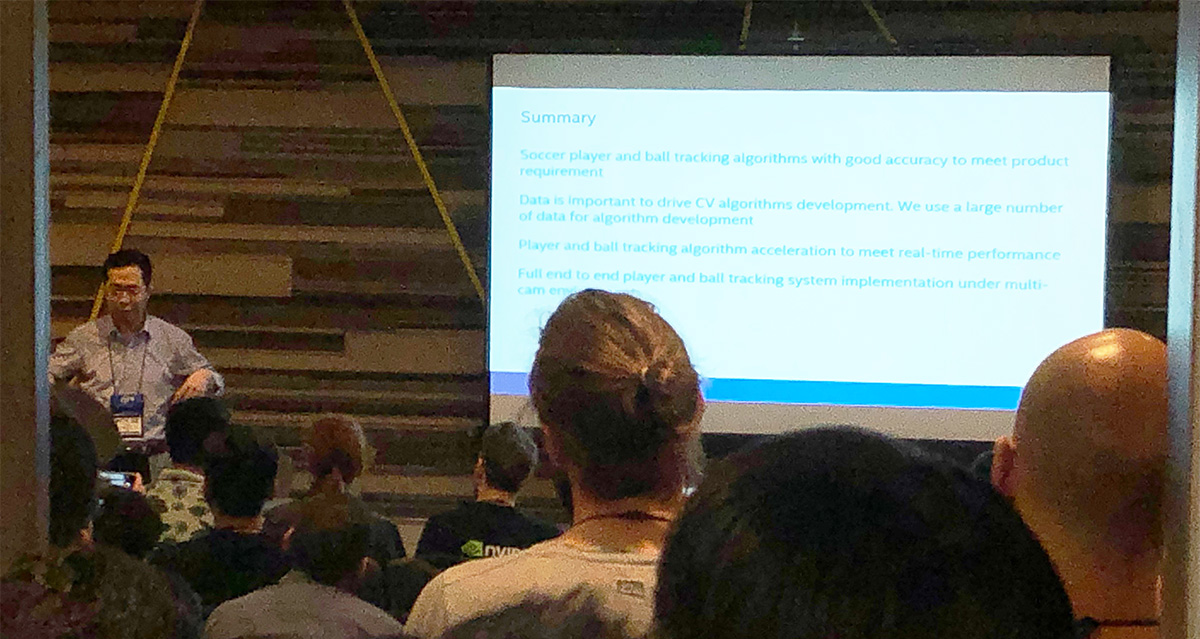 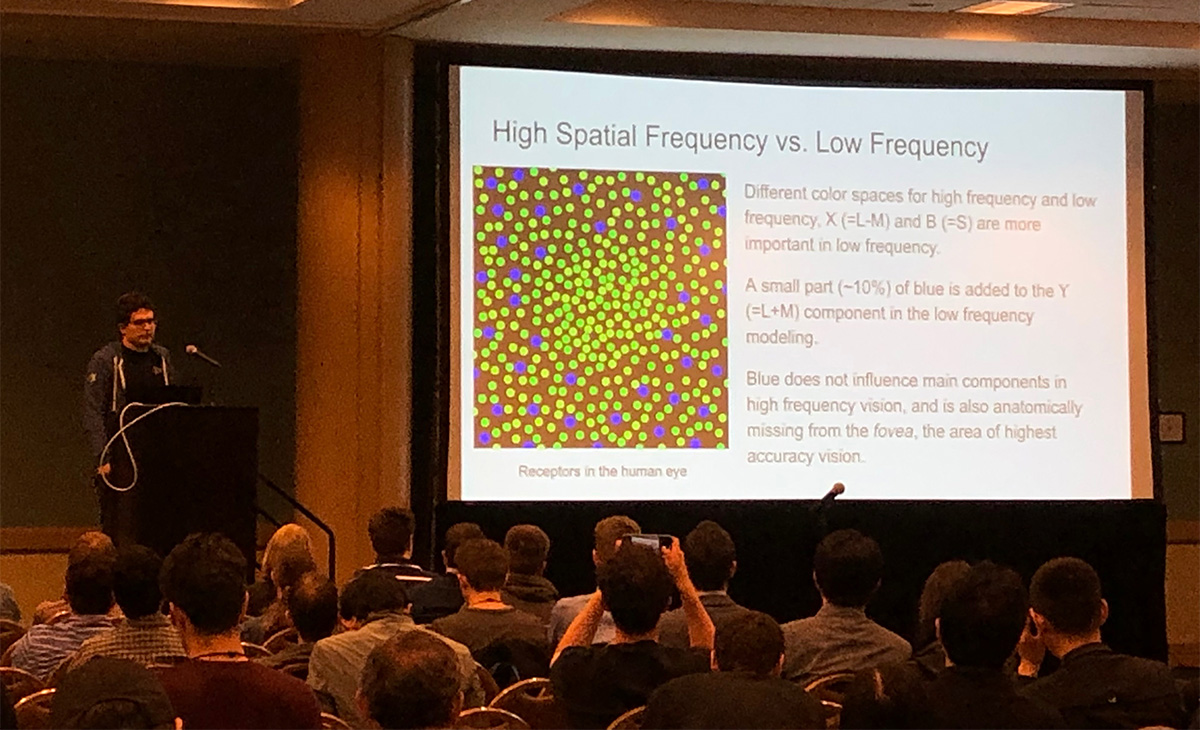 The workshop offered an impressive lineup of speakers: Anne Aaron, director of video algorithms at Netflix who leads the team responsible for video analysis, processing and encoding in the Netflix cloud-based media pipeline; Aaron van den Oord, a research scientist at Google’s DeepMind, London, whose research focuses on generative models and representation learning; and Luca Versari (pictured speaker above), a software engineer at Google AI who works as a core member of the JPEG XL development team.

“Our workshop aims to gather publications which will advance the field of image compression with and without neural networks,” the organizers said. “Even with the long history of signal-processing oriented compression, taking new approaches to image processing have great potential, due to the proliferation of high-resolution cell-phone images and special hardware (e.g., GPUs). The potential in this area has already been demonstrated using recurrent neural networks, convolutional neural networks, and adversarial learning, many of these matching the best image-compression standards when measured on perceptual metrics.” 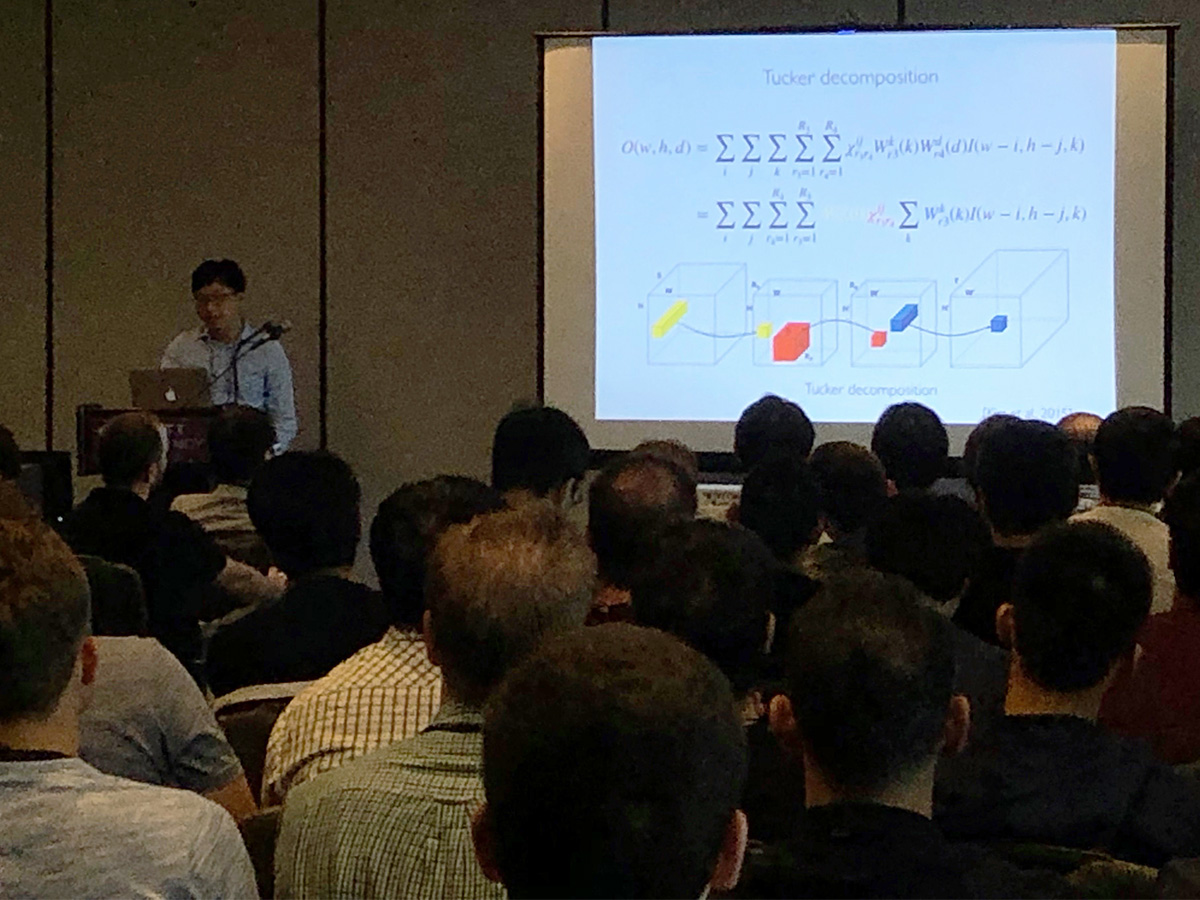 Organizers of this workshop—Peter Vajda, Pete Warden, and Professor Kurt Keutzer of the University of California, Berkeley—created “a venue for consideration of this new generation of problems that arise as computer vision meets mobile system constraints,” they said in a workshop summary.

“We will make sure we have a good balance between software, hardware and network optimizations with an emphasis on training of efficient neural networks with high-performance computing architectures,” they said. 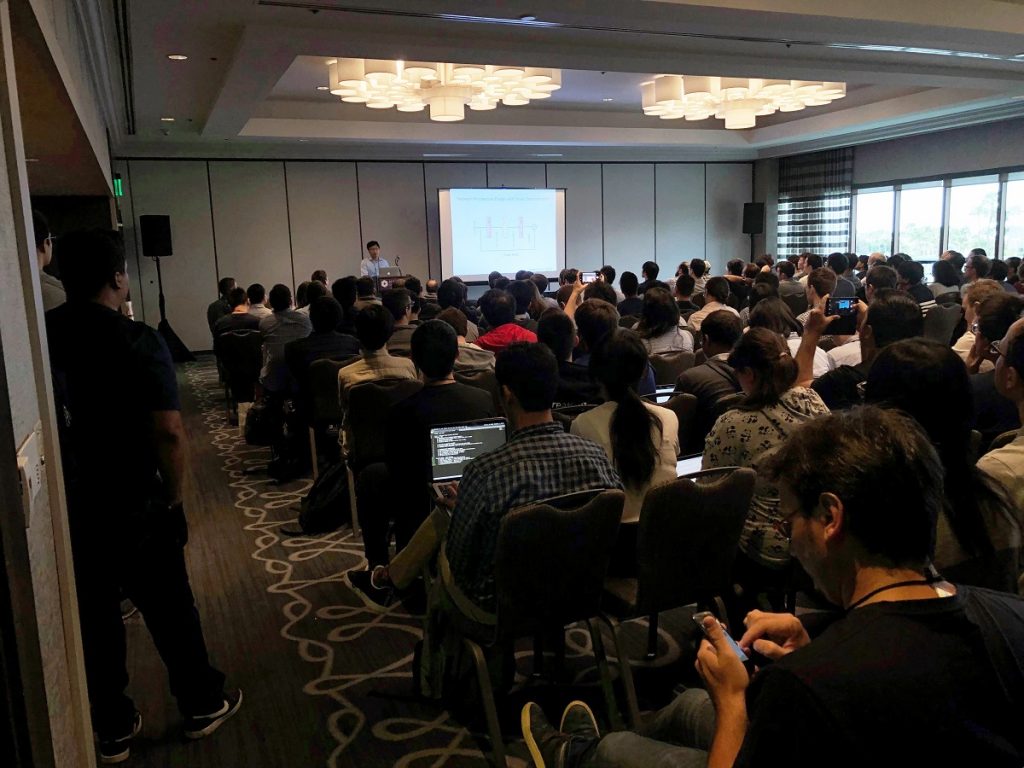 It was standing room only for the tutorial “Safe Artificial Intelligence for Automated Driving,” where Patrick Perez, scientific director for Valeo.ai, discussed the limitations of what was termed “black box” solutions in safety-critical applications like autonomous vehicles. 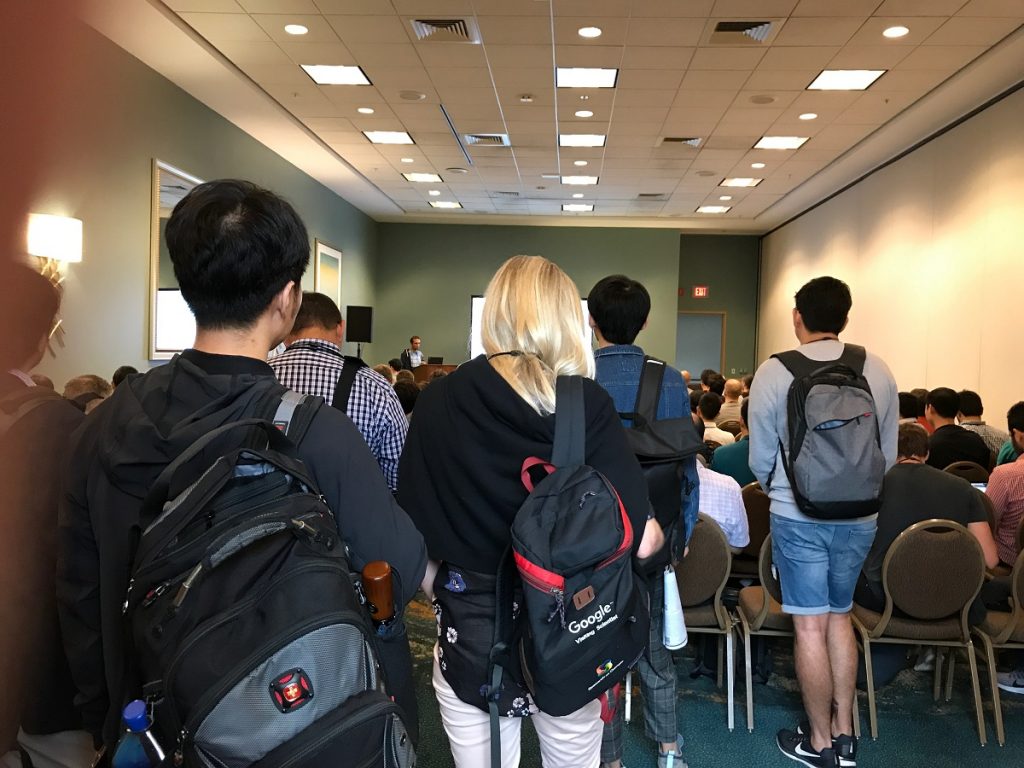 Attendees poured into the room for Patrick Perez’s talk on improving a smart car’s ability to spot objects and pedestrians in the road. The focus was on improving mechanisms that influence deep learning for computer vision in the training, testing, and inference stages of autonomous vehicle development. 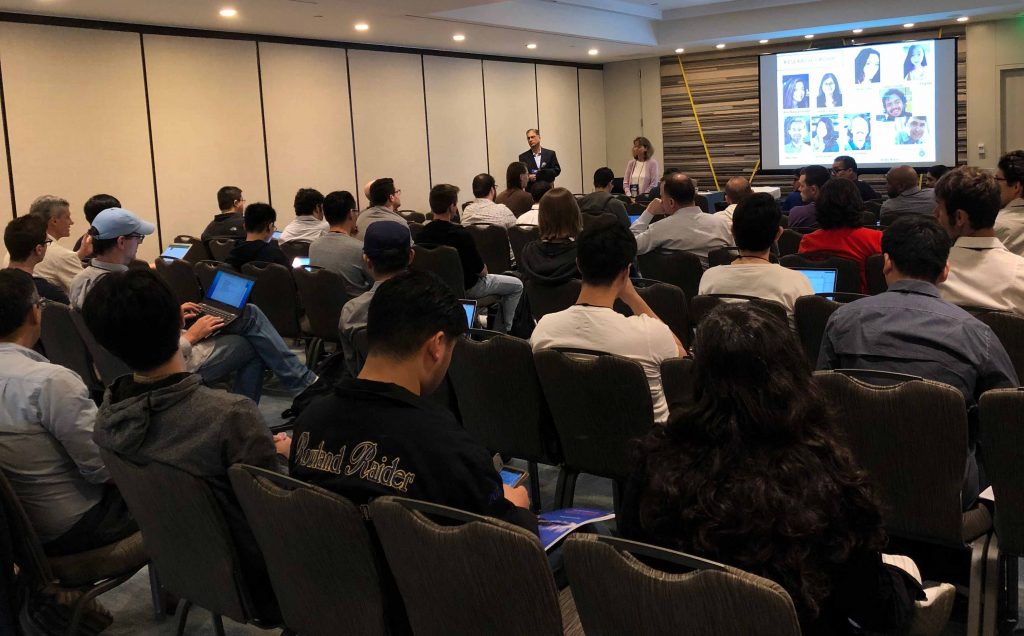 The audience members asked a pointed question: How does computer vision determine race—especially when the questioner said he didn’t believe in race among human beings?

It was a provocative question asked at Bias Estimation in Face Analytics (BEFA) workshop, where organizers highlighted how “an honest and scientific look at the state of the art and a discussion around diversity, fairness, and bias in face analytics is expected to shed light and suggest directions that can improve fair face recognition and attributes prediction.”

“In order to progress toward fair face recognition and attribute estimation truly in the wild, we encourage the development of systems that provide uniform performance across multiple factors: age, gender, ethnicity, pose, resolution, etc.,” organizers said.

Organizers provided a summary of the more notable challenge workshops, which covered some of the biggest trends in computer vision: