MPEG technologies are well established with respect to audio and video coding. New activities over these basic standards aim to develop applications to handle MPEG multimedia content; some such applications are already a reality. This month’s theme presents some of the last research results around this idea. These articles discuss a middleware to help developing complex applications, a format to deploy open release content, an ontology to handle rights during content’s complete life cycle, the rights information interoperability issue, and the improvement of content adaptation and its relationship with associated rights and context information.

In “The MPEG Open Access Application Format,” (login required for full text) Florian Schreiner, Klaus Diepold, Mohamed Abo El-Fotouh, and Taehyun Kim introduce the concept of MPEG Application Formats (MAFs). In particular, they look at the Open Access MAF, which standardizes the packaging of digital content and associated rights information into an application format to facilitate open access to content and its interoperable exchange.

Content’s complete life cycle must be taken into account to correctly manage the associated rights. The Media Value Chain Ontology (MVCO), standardized as a part of MPEG-21, is a step toward effectively handling the life cycle from a semantic point of view. Victor Rodgriguez-Doncel and I discuss this ontology in “A Media Value Chain Ontology for MPEG-21.” (login required for full text)

Also in the area of rights management, “MPEG-21 and Its Interoperability with Rights-Information Standards” (login required for full text) by Hogab Kang, Keunyoung Lee, Taehyun Kim, and Xin Wang focuses on the specific needs for interoperability of applications such as broadcasting. Kang and colleagues discuss how this could be achieved with MPEG-21 Rights Expression Language profiles.

The last two articles in this theme concentrate on the content context and adaptation issues that MPEG helps to solve. “A Platform for Context-Aware and Digital Rights Management-Enabled Content Adaptation” (login required for full text) by Anna Carreras and colleagues discusses this topic in relation to, again, rights management. In “Automatic Adaptation Decision Making using an Image to Video Adaptation Tool in the MPEG-21 Framework,” (login required for full text) Fernando Lopez, Jose M. Martinez, and Narciso Garcia specifically discuss the adaptation decision process and how to automate it.

I hope you enjoy these articles and find them useful. You might also be interested in this video interview with MPEG convenor Leonardo Chiariglione. Please log in to leave a comment about this month’s theme. 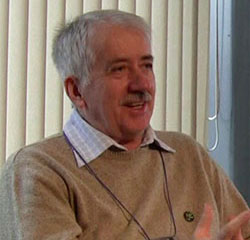 Leonardo Chiariglione was born in Almese (Italy). He has an MS in electronic engineering from the Polytechnic of Turin and a PhD from the University of Tokyo.

In 1988, Chiariglione originated the ISO standardization activity known as MPEG (Moving Picture Experts Group) of which he is the Convenor.

Computing Now Associate Editor Christian Timmerer caught up with Chiariglione at the 91st MPEG Meeting held in Kyoto, Japan during 18–22 January 2010. Their discussion ranged widely, from looking back at the creation of the MPEG to the impact of the MP3 format to social networking.

Leonardo Chiariglione looks back at the history and the major milestones in the creation of the MPEG standard.
Download Video (.flv; 4:48)

Twenty years removed, Leonardo Chiariglione discusses what he would have done differently in creating the MPEG standard.
Download Video (.flv; 4:36)

Leonardo discusses the impact of social networking and mobile devices on development. He also talks about his involvement with the development of MP3 and its effects on the record industry.
Download Video (.flv; 6:35)

Leonardo offers his advice to young developers. He also discusses the role of metadata for the standard.
Download Video (.flv; 7:06)

Jaime Delgado is a professor in the Computer Architecture Department at the Universitat Politècnica de Catalunya. Contact him at jaime.delgado@ac.upc.edu.