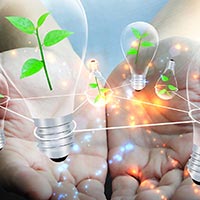 The Big Data era promises some significant advancements but also introduces many new challenges. The memory and processing power required for storing and analyzing that data will quickly surpass what our current infrastructure can provide. Massive data centers are expensive, and trends indicate that both demand and cost will continue to grow faster than Moore’s Law.

Memory is projected to consume an increasing fraction of total system power for a balanced exascale platform. Maya Gokhale of Lawrence Livermore National Laboratory has shown that a 64-bit integer operation costs roughly 1 picojoule (pJ), but that reading DRAM to get that data (not even accounting for data-transfer costs) is 16,000 pJ per bit. Additionally, Bill Dally of Stanford has estimated that a 32-bit floating-point operation requires 3.1 pJ, whereas the same DRAM read requires 640 pJ.

Clearly, moving data to the processor (and back) is an unsustainable approach to computation; instead, why not move the processing to the data? This March 2017 Computing Now theme examines current research in processing in memory (PIM) and near-data processing (NDP), approaches that could become timely solutions to many problems. In addition to featuring seven recent articles on the topic, we’ve included sidebars with related articles and resources to provide a sense of how the field has developed over the past 50 years.

The idea of moving computation to the data is not new. Around 300 BCE, scholars came to study at the Library of Alexandria, where they had access to all books at once, rather than sending for one at a time. In the same way, PIM moves processing into the memory, so that it doesn’t have to fetch one datum at a time.

PIM has been tried many times throughout the Information Age:

These and many other implementations met with limited real-world success, struggling with high costs and limited memory capacities.

If combining processing and memory didn’t succeed in the past, why should we continue to investigate the idea now? The simple answer is that today’s technology can overcome the problems of the past. We now have:

Additionally, we’ve now hit the memory and power walls, as well as broken both Moore’s and Dennard’s laws—both of which bailed us out for many generations of computing systems. We believe the time is right and the demand is strong for this approach.

In “Fine-Grained Task Migration for Graph Algorithms using Processing in Memory,” Paula Aguilera and her colleagues use the irregular access patterns of graph-based algorithms to motivate the need for 3D memory cube-based NDP. The article combines many of the core historic elements of classic PIM (including work moving) to provide acceleration for graph algorithms in a modern heterogeneous design.

“Near-DRAM Acceleration with Single-ISA Heterogeneous Processing in Standard Memory Modules” examines the potential for accelerating a unified architecture by moving execution units nearer to the standard DRAM, while maintaining a single ISA. Hadi Asghari-Moghaddam and his colleagues argue that their system consumes almost 65 percent less energy than the baseline system at nearly twice the performance. This article is reminiscent of Stone’s early work.

Ping Chi and her colleagues examine the potential for utilizing novel memory device technologies to implement emerging computational models in “PRIME: A Novel Processing-in-Memory Architecture for Neural Network Computation in ReRAM-Based Main Memory.” This article provides an interesting discussion of the potential trade-offs in implementing new approaches to computation with fabrication technologies optimized for memory.

“HAMLeT Architecture for Parallel Data Reorganization in Memory,” by Berkin Akin, Franz Franchetti, and James C. Hoe, explores the potential of using PIM to facilitate data reorganization while simultaneously maintaining memory system services for the host processor. This is an often-overlooked topic in PIM research, as memory systems are fundamentally data-movement engines.

The end of Moore’s law is sparking renewed interest in PIM and NDP approaches, as people turn to architecture to provide the scaling benefits that were previously achieved through transistor technology. We hope this Computing Now theme will inspire further research into these important energy-efficient solutions.

Kevin Rudd is a computer systems researcher at the Laboratory for Physical Sciences and an editorial board member of IEEE Micro and Computing Now. Contact him at kevin@lps.umd.edu.

Richard Murphy is the director of Advanced Computing Solutions Pathfinding at Micron. His group focuses on R&D in computer architecture, memory systems, supercomputers, data analytics platforms at all scales, and disruptive mobile/embedded technologies, particularly PIM. He has led several large multidisciplinary teams to deploy new technologies. He also cofounded the Graph 500 benchmark, which has served as a catalyst to identify data-movement challenges in large-scale analytics problems. Murphy previously worked at Sandia National Laboratories, Sun Microsystems, and Qualcomm. He is an adjunct faculty member at the Georgia Institute of Technology and Boise State University, and has authored more than two dozen papers and patents. He holds a PhD in computer science and engineering from the University of Notre Dame and is a senior IEEE member. Visit his personal webpage at http://richardmurphy.net, or contact him at rcmurphy@micron.com.