The Impossible Task: Asking for Directions
By David Alan Grier 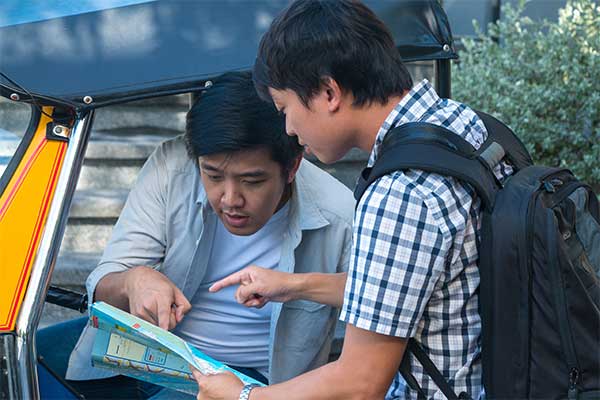 I have a question about China: Do men, when they are driving, ask others for directions? For instance, when a man is driving in an unfamiliar neighborhood, might he ever stop and ask someone, “Can you direct me to the Chengxin Comprehensive Supermarket?” I am interested because it might help me understand the recent interest in autonomous or self-driving cars.

In the past two months, many people—most of them male—have been talking about autonomous cars and claiming that we might be only a few months or even a few weeks from seeing such cars on the road. Even now, Google is testing self-driving cars in California and Nevada. I have been following the progress of this technology with a little skepticism. Although I believe that we will likely have some form of autonomous transportation in the near future, I’m not sure what problem we are attempting to solve with this technology. Are we really trying to improve our transportation system, or are we merely trying to help a group of men who are too embarrassed to ask for directions?

Now, I am probably not the one to answer this question. I enjoy exploration a little too much. When I am driving, I like to take unfamiliar routes and see what I can find. When I do this kind of travel, I have a rough mental map of the area. I will know that one side of a neighborhood is bounded by a river, for example, and other side is crossed by a highway. I’ll also know a few major streets and landmarks in the area. Armed with that information, I’ll start my trip and see what I can see.

This exploration process is only part of an autonomous vehicle—perhaps the easiest part. Autonomous vehicles typically divide the control technology into four layers. The first layer senses information about the vehicle’s location. It takes information from global positioning system (GPS) to find where the car is positioned on the earth. It monitors sensors in the car to discover its speed and how its systems are performing. It also uses sensors, such as a light detection and ranging system, to gather information about the car’s position on a road, other vehicles’ location and speed, and the location of any other potential obstacles such as pedestrians.

The second layer is the positioning layer. It takes all the information and builds a detailed model of the car’s location and state—information that American men apparently are not willing to admit that they might lack. This model is updated moment by moment and forms the basis for the third layer of technology—planning and control.

The planning and control layer is divided into two parts. One part plans the route and is similar to the kind of technology in GPS. However, it is a little more sophisticated than conventional GPS systems as it can revise a route based on local conditions. If traffic has forced the car to travel slowly, it looks for alternative routes.

The other part of the planning and control layer deals with the tactics of driving. This layer develops a series of commands that will get the car to travel a particular route. It directs the car not only to go the proper speed and make the proper turns but also to keep in the right part of the lane, change lanes to pass a slower vehicle, swerve to avoid obstacles, and stop at traffic lights.

The final technology layer in an autonomous car takes the commands from the planning and control layer and converts them into instructions that the car executes.

The four-layer division of autonomous vehicle systems seems straightforward and obvious, but it took approximately four years to develop. This development was guided by three contests—often called “grand challenges”—that the US government sponsored. Through the Defense Advanced Research Projects Agency (DARPA), US government regularly runs contests to help develop new technologies, defining a task that the technology must perform and offering a prize to the team that can makes the best technology. Typically, competitors are university research teams.

In 2004, DARPA sponsored a contest to develop a car that could drive itself over a road in the desert—a road with no pedestrians, no traffic, no obstacles to get in the way. It sounded, easy but it was not. None of the entrants finished the course. Many failed a short distance from the starting line.

In 2005, DARPA repeated the contest. Over the course of a year, the contestants had radically improved their technology. Several completed the course. The team from Stanford University was the fastest. Two years later, DARPA held a contest on a course that was designed to look like a city. It included traffic and stop signs. This time, a team from Carnegie Mellon University won.

After the 2007 contest, the technology from these universities quickly moved to private companies.  Google has been working with the leaders of the Stanford research labs. General Motors has a joint agreement with Carnegie Mellon.  In the past several months, both groups have suggested that we might have commercial autonomous vehicles sooner than many anticipated.

At the start of this month, I attended an event in which a policymaker announced that he had seen one of the Google cars and was highly impressed with it. His presentation, which was marked with the kind of enthusiasm that we give only to new and untried ideas, noted that Google had driven the cars for 500,000 miles and claimed that they were 10 times better than the best human driver.

This claim left me wondering how one measures the quality of an autonomous vehicle. Certainly, there is no single linear scale that grades drivers. It might be possible to claim that the car was 10 times less likely to get in an accident than a human driver or that it reacted to danger with 10 times the speed of a human. Because these cars are often touted as reducing traffic or consuming less fuel, we might try to make a comparison with those factors, but we can hardly claim that they increase road capacity by a factor of 10 or reduce the need for fuel by an equal percentage. Finally, we might argue that autonomous vehicles are much less likely to stop and ask for directions than human drivers, but as I have noted, American men don’t stop and ask for directions, so again, the comparison is meaningless.

In fact, we probably don’t want to compare autonomous vehicles to human drivers. If we eventually deploy self-driving cars, they will not merely replace human operators. They will create an entirely new transportation system. We can get a hint of that new system if we look at how the transportation system changed when we moved from bicycles and animal-drawn carts to gasoline-powered automobiles. Automobiles did not merely replace the older forms of technology; they regimented traffic, creating new rules of the road such as driving on the right side of the street (or the left depending on your country), stopping at stoplights, and signaling for turns. All of these things were unknown or much less common before the automobile.

The automobile’s influence on traffic patterns can be seen in any city that still relies on motor scooters. In these cities, traffic tends be far more chaotic than in those dominated by automobiles. The scooters don’t always stay in the lanes, and they rarely obey traffic lights. If you are trying to cross the street, the best advice is to move at a steady pace. The drivers will see what you are doing, anticipate where you will be, and adjust their path to give you room. If you wait for a break in the traffic before you cross the street, you will never make it to the other side.

So, we might be mistaken in thinking that autonomous cars will slowly replace cars driven by human beings. Such a transition would be long and chaotic. We are more likely to see autonomous cars emerge in new transportation systems, such as long-haul truck caravans or shuttle services in constrained environments. We might ban all drivers from inner cities and replace them with autonomous taxis and buses. In this setting, we could tightly engineer the system, remove conventional traffic lights, and create new rules for sharing intersections. In such a case, we wouldn’t compare computerized drivers to human drivers because we would have no human drivers in the system.

In building an autonomous automotive transportation system, we might find that the hardest part is the transition from our current system with human drivers to one that is controlled only by software. In that transition, we will need automated vehicles capable of responding to a mix of vehicles, automated and nonautomated. That is a harder problem than making a system controlled entirely by software. It is even harder than the task of getting an American man to stop and ask for directions. Not even the best software can make that happen.