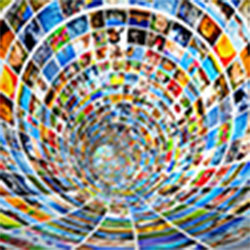 Tech conferences are an opportunity to glimpse through the looking glass into the future. The Society for Information Display (SID) annual Display Week is no exception.

Since the dawn of the century, displays in the age of consumer electronics have grown in size from small early phones and very early smartphones to much larger displays. Early plasma HDTVs were limited in size due to manufacturing challenges and in the field of view that they achieved.

In time, larger screens were developed such that we now have much larger home TVs of 110” or more. There has been a significant increase in digital signage for retail and roadside billboards capable of electronic updating.

Companies such as Apple and Corning, partners funded by Apple’s Advanced Manufacturing Fund are developing glass to be ready for the time when all glass will be a screen.

But it is not just screen size. Better screens, better components, not just more pixels on the screen, but better pixels, have combined to enable high dynamic range (HDR) and high frame rates (HFR) and in many cases, 3D stereoscopic images.

Consider it better packaging in the sense that it has been driven by the need for content to be seen in the best possible way. Poor display systems detract from the experience, often no matter how good the stories are or how compelling and relatable the characters may be.

We are on the eve of the Society for Information Display’s (SID) annual Display Week. The conference is always exciting as the wide-ranging program encompasses such topics as the business and industry, investors interests, technical papers examining breakthroughs in new technology and the all-important exhibition hall.

It is the exhibit hall that displays the future, so to speak. It is here that we get a glimpse of the many innovative products and services ranging from early concepts and prototypes to mature products that are changing the way we access, and in turn view, content of all kinds on devices of all sizes and yes, shapes, such as curved and folding screens.

Time is needed to take a concept through development, to become a market ready product. Many do not survive the development process. In some cases, they are simply ahead of their time.

Many concepts and prototypes of today will, in time, be the mature products of tomorrow in the global marketplace. We’ll be on the lookout for those on the show floor.

Six years ago, in September 2012, we published Futuring High Frame Rates that discussed how the industry had evolved from film to digital projection and the high definition images (HD) and high frame rates that would enhance the viewing experience.

At that time, we wrote:

Looking ahead the theaters will install 40, 50, 60 and 80-foot electronic displays. While it will take time for the electronics manufacturers to reach that level, the signs are there now with the Sharp 8K display, the Sony 4K TV, the pending rollout of 4K projection and the potential for ultra HD.

That day is here, built in part on the many innovations seen at Display Week.

At a recent conference we had the opportunity to experience the Sony Crystal LED Display designed for the cinema. It is modular and thus able to be adapted to multiplex auditoriums of varying sizes.

Although we have not yet seen the comparable product from Samsung, we have heard very positive buzz about the DCI (Cinema Initiative) compliant Samsung Onyx Cinema LED display.

Both Sony and Samsung boast the incorporation of HDR in order to display the deepest blacks and the whitest whites and all colors in between.

The question raised most often by the industry pundits is whether the products from Sony and Samsung will gain acceptance in the exhibition marketplace, even as the industry had a slight decline in attendance in North America in 2017 from 2016 and are thus working hard to enhance the overall cinema experience.

Some determinants for manufacturers, exhibitors and distributors include:

Pricing – Currently the two are very expensive, reportedly in the $700,000+ range. But that is not unusual for a new product introduction. In due time, as occurred with HD and UHD TVs, the price declined and, so, it will with these giant displays, especially as competition and production volume increases in the global marketplace.

Exhibitor acceptance – Many exhibitors are still paying for the conversion from film/celluloid to digital. That conversion was aided by the virtual print fee (VPF) that the studios paid each exhibitor, thus sharing the cost savings from not having to manufacture and ship heavy film prints. It remains unclear at this time if studios will be financially incentivized to assist in the conversion to giant displays.

It is possible that exhibitors will begin using the new displays at new locations in conjunction with other renovations at their multiplexes.

File transport – File transport from Hollywood to the theaters is a combination of satellite delivery and hard drive shipment. These new displays would likely be driven by the content on the local servers at each venue. Thus, studios would still need to deliver the content to the venues in much the same fashion as they now do, with no reduction in cost.

Consumer acceptance – Millennials, generation X and those younger have in their lifetimes watched a significant amount of content on “glass” be it their phones, tablets or laptops. Thus, this group in particular may be more inclined to choose a theater with the new screens if available in their geographic areas, for a price they are willing to pay.

Availability of content – The same digital files currently used for digital projection cannot be used for these new displays, although it is reported that a significant amount of extra work is not required. Both manufacturers are reportedly working with studios to refine the post production processes to generate the required file format. It is likely the distributors will produce the files selectively until such time as there is an adequate installed base.

While Sony and Samsung are the only products currently in the marketplace, it is possible that in due time as the market develops, that other big players such as LG and the many display manufacturers in China will enter the competition. Of course, the screens would have other uses in addition to the cinema.

Based in Los Angeles this year for the annual conference SID has a unique opportunity to cater to the entertainment industry, one that is continuously seeking new technologies. And while the largest of these displays may not be exhibited, the components for them will be and there is no doubt that they will be hot topics of conversation.

We’ll be there to check out what the many vendors, large and small, have in store for us, for today and as we peer into the looking glass into the future. The topic will also be covered at our Future of Film panel at Digital Hollywood on May 23.

About the author: Marty Shindler is the CEO of iShindler, a husband and wife advisory team with credentials that includes a Big 4 (Coopers of PriceWaterhouseCoopers), top 5 business school (Sloan at MIT) and hands on experience at 20th Century Fox, MGM, Lucasfilm’s Industrial Light & Magic, Kodak’s Cinesite and Bank of America. Mr. Shindler may be reached at Marty@iShindler.com. Follow him @MartyShindler.