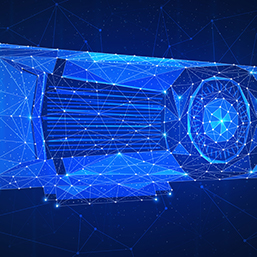 From large outdoor interactive screens on buildings to tiny displays in a wristwatch, the display industry has created applications and entire industries over the past 60 years, transforming our entire society. Just take a look at laptops, tablets, mobile phones, and other handheld devices, which were all possible thanks to displaying technology innovation.

Older TVs took half the space in your room; now they are like a painting on the wall and in some cases thinner than a portrait frame. Modern displays are everywhere now – from the back of the seat in an airplane and taxicab to stadiums and other public venues, tiny kiosks that serve one person at a time, and of course, medical devices, military vehicles, and more. Display innovation can also be found in factory equipment, oil rigs, trains, trucks and boats, and airplanes. Other unique display applications include displays embedded in a credit card.

Innovators in this industry are displacing shelf labels in stores, printed signs, and printed timetables at bus stops and train stations.

It has been thrilling to be part of this industry for the past 25 years. Right out of engineering school, I worked on vacuum tubes – CRTs ruled then – and later on, monochrome LCD. I got my real start with displays at Standish Industries in Wisconsin, which was a pioneer in wide temperature monochrome TN (twisted nematic)) and STN (super-twisted nematic) LCDs, which were used in a variety of rugged applications.

It was exciting to work on rugged displays that provided valuable information that made them indispensable – from gas pumps to ATMs, parking meters, aircraft displays, and John Deere tractor consoles. Later I was fortunate to work on TFEL displays while at Planar; on early AMLCD while at TFS; best in class AMLCD while at Sharp; on electrophoretic ePaper while at E Ink; and presently, I get to work on every major cutting edge display technology.

One thing I find fascinating about this industry is that you can’t write off any display technology when something new enters the market. Some of these technologies linger on for much longer than you expect; some should have been out of the industry 20 years ago, but they are not – they find niche applications and continue to make a living for someone.

In honor of the Society for Information Display’s (SID) 60th anniversary, I’d like to take a look at some of the display technologies and their impact over the past six decades:

CRT (Cathode Ray Tube): Traditionally used for computer monitors and televisions, and also made its way into military and even maritime applications. Demand for CRT screens dropped in the late 2000s and was replaced by LCD.

VF (Vacuum Fluorescent): Originally used in car stereo displays but has dwindled to obsolescence in the past decade.

FED (Field Emission Display): A technology similar to CRT, which relied on electrons striking a phosphor-coated surface in a vacuum environment. It did not make it to the mainstream.

LED (Light Emitting Diode): Popular in handheld calculators and other similar devices in the 1960s and moved into digital store signs and bigger outdoor digital signage such as in Las Vegas, continues to dominate the outdoor signage space.

TFEL (Thin Film Electroluminescent): Sharp demonstrated TFEL in 1975 and made the first commercial display in 1983. Mainly used in industrial, medical, and rugged applications. The military used this display in the main battle tank, for example.

TN and STN LCD Monochrome: This display technology was pretty prevalent until color versions showed up. It is still used in gas pumps, parking meters, and simple appliances.

Plasma Display: Some people still refer to flat-panel TVs as plasma. This technology had a short tenure but paved the way for the next generation of flat TVs.

Projection Displays using DLP/LCoS: They were originally designed when it wasn’t possible to make large-area LCDs. With projectors, you could create a 100-inch image. These displays are still around in older conference rooms and home theaters.

AM LCD (Active-Matrix Liquid-Crystal Display): The most impactful and successful display technology history, boasting about 80% of the global market to the tune of approximately $100 billion. Used in pretty much every application that has a display but has been quickly giving up ground to OLED over the past five years.

PMOLED (Passive Matrix OLED – monochrome): OLED technology started out as monochrome and made initial inroads in applications that required higher contrast and faster response. Now it is quickly eroding like a monochrome LCD.

AMOLED (Active-Matrix Organic Light-Emitting Diodes): The second most impactful and successful display technology after AMLCD and is found in personal devices such as the Samsung Galaxy Phone, LG ‘wall-paper like’ TV. This has been the fastest growing technology in the past decade.

Quantum Dots: This is technically not a display, but it enhances displays by making LCD colors “pop” in TV applications.

MiniLED: This small form factor LED brings the technology indoors in signage applications where the user is closer to the display than its predecessor, which was used mostly outdoors. This is relatively new and might give way to MicroLEDs and itself relegated to backlight applications.

Electrochromic/Electrowetting/MEMS/Electrofluidic/Cholesteric LCD: These technologies all aimed for the broad ‘ePaper’ applications, but that did not quite happen. Some of them, like Electrochromic and Cholesteric LCD, have had modest success in non-display applications like airplane windows, car rearview mirrors, toys, and writing pads.

MicroLED: An emerging flat panel display technology that I think holds great promise in the future. It brings some of the most desired display characteristics, and the industry has seized on this opportunity with every major display company working on this tech.

Speaking of the future, I’d like to now dive into some of the display innovation trends I see by the year 2035:

AR/VR glasses: These will be ubiquitous and lightweight, much like eyeglasses are today. They will last a long time without having to recharge. The display won’t intrude, it will augment, and its computing power will exceed that of today’s laptops. But it won’t be for everyone.

Immersive displays: Holographic and 3D displays could replace the wall the TV is hanging from today; they will also replace the kitchen countertop, the restaurant table, the student desk, and the tray table in an airplane.

Auto: The entire windshield will be like a movie screen in autonomous cars; the inside roof will be your display monitor, while the sides of cabs and Uber cars will convey useful information.

Conference room: Every video call will replicate a virtual conference room with lifelike 3D images, directional voice, the ability to confer (the chat function is archaic), and the ability to stand up and speak to a room or teach a class where the physical – the virtual class will be seamless.

Entertainment: Much like today’s surround sound, we will have to surround visual displays, which will be like IMAX theaters but in each home, car, and airplane seat.

Buildings and Roads: In Times Square, the bricks on the walls of tall buildings will be made of ‘display blocks.’ Every display will be curved, and every road sign will be an electronic display.

Gaming: Gaming consoles will be better than the Universal/Disney Studios experience today – you will find yourself in the game as a player or as an actor in a movie, dunking basketballs in a major league game, or hitting the cricket ball to the boundary.

Branding: Handbags, carrying cases, and shopping bags will feature paper-thin displays that will depict, camouflage, and promote a brand or message – as your heart desires.

Viewing the world: Displays will replace windows to save space, create the atmosphere you desire, and double as solar panels and privacy glass.

Mobile: Your phone will completely replace your wallet, remote, car keys, door keys, entry badges, and event tickets – all of these are already happening, but the transformation will be 100% with changes in display and related technologies.

Digital Art: Wall paintings and art will be digital displays, showcasing your favorites and will change every day or every minute and adjust to what’s happening in that room. You will be hard-pressed to tell the difference between a display and an oil-on-canvas painting.

It’s thrilling to think about my younger industry colleagues who will pioneer the next 60 years of display technologies. Devices will continue to be smaller, smarter, and versatile. From phones to cars to AI devices, display technology will enhance how we live, work, and play. I expect the industry to build displays that will exceed the expectations set by every futuristic display we have seen in any sci-fi movie thus far.

Every time we reach what we think is the limit on what a display technology can do, along comes an industry colleague with a new chemical formulation, or the ability to bend some light or stretch some laws of physics to keep it going. It’s been a fantastic ride. I can’t wait for more.

Sri Peruvemba is CEO of Marketer International Inc. in California. He has also served on the Executive Board and was former Chair of Marketing for many years for the Society for Information Display (SID’s Display Week 2022 will be held in San Jose, CA, May 8-13, 2022). With over 30 years of experience in the technology industry, Peruvemba has been an influential advocate in the advancement of electronic hardware technologies. He is an acknowledged expert on sensors, electronic displays, haptics, touch screens, electronic materials, and related technologies; and consults, writes, and presents on those subjects globally. Contact Mr. Peruvemba at sri@miinc.co. 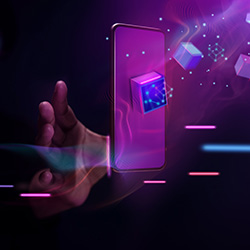 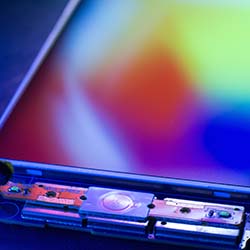 The Bright Side: The Evolution of Digital Displays for Outdoor Use 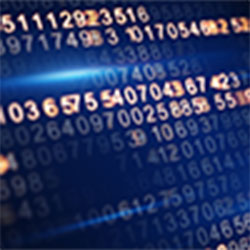 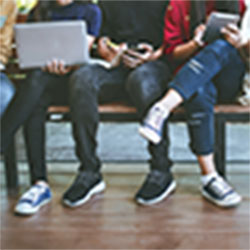 Will Education be the Next Big Market for Electronic Displays?

Nits, Bits and Other Tidbits – Takeaways from SID’s Display Week 2018