In a mere 25 years, the Web has irrevocably transformed the world. It has become indispensable, impacting nearly every aspect of human activities in practically all fields. It continues to leap ahead offering new capabilities and extending its reach and utility. The Web has indeed become the most influential technology of our times, although it hasn’t reached its zenith and we’ve yet to recognize and embrace its full potential.

This issue of Computing Now commemorates the Web’s 25th anniversary by highlighting its genesis, progress, and potential. We invite you to comment below and share your thoughts on how the Web will be in the next quarter century.

This world-changing innovation was born from a humble objective: to share information among a small group of scientists. In 1989, Sir Tim Berners-Lee, then a 34-year-old physics graduate working as a software engineer at CERN, the European Particle Physics Laboratory in Geneva, Switzerland, laid the foundation for the Web. He developed a project proposal, titled “Information Management: A Proposal,” for a new way of linking and sharing information over the Internet and sought approval from his boss who wrote “vague but exciting” on the first page and approved the project.

The first Web page went online two years later, and in 1993, CERN allowed the technology to be freely used by all. For further details and comments from pioneers who laid the foundation for and contributed to the Web’s prominence, see the EMC report.

As Figure 1 illustrates, we can describe the Web’s evolution — past, current, and anticipated — in four stages: 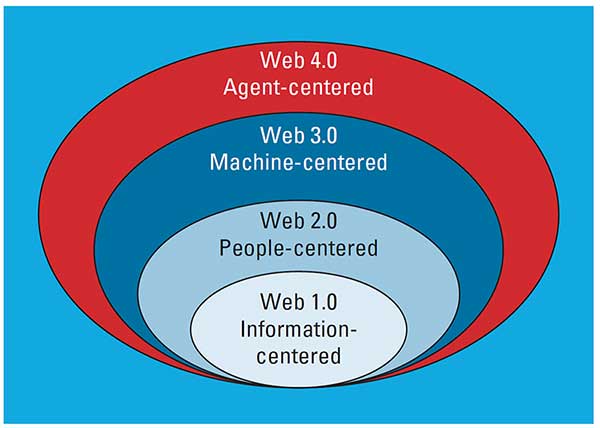 The July 2014 issue of CN presents six articles that explore the Web’s evolution, the open platform’s transformational power, Web accessibility, Web science and the Web Science Observatory, and the development and securing of mobile Web apps.

In the first article, “A Robotic Web,” Michael Huhns presents an interesting view of the Web’s evolution in terms of common robotic cognitive capabilities — perceive, reason, and act. A PRA architecture robot uses its sensors to perceive its environment, reason about those perceptions, and then decide on actions. Huhns suggests the Web is on its way to encompassing these cognitive abilities as it perceives the state of the world; reasons about the vast amount of knowledge, information, and data online; and takes appropriate actions. The evolutionary goal is to let the Web take better advantage of the information and data it has and to engage in a more active role, thus creating a far more useful Web than we have today, particularly where it is connected to sensors and actuators, as in the smart grid, Web of Things, and Internet of Anything.

The open, decentralized Web is essentially a universal platform for communications and interactions. This open approach has fostered widespread creativity and led to the Web’s rapid evolution and amazing growth. In the next article, “How the Open Web Platform Is Transforming Industry,” Ian Jacobs, Jeff Jaffe, and Philippe Le Hegaret from the World Wide Web Consortium (W3C) discuss how key technologies such as HTML 5 make up an Open Web Platform and examine how the platform is transforming entire industries and society as a whole.

The Web must be fully accessible so that all users can benefit, including those with disabilities. Several assistive technologies and standards now facilitate this accessibility objective. In “Toward an Equal Opportunity Web: Applications, Standards, and Tools that Increase Accessibility,” Lourdes Moreno and her colleagues present an overview of several technologies that enhance Web accessibility, and they discuss the development of accessible applications with a full range of interactivity.

Understanding and fostering the growth of the Web’s ecosystem from technical, societal, and other perspectives calls for a coherent, comprehensive interdisciplinary study. A new discipline, known as Web Science, focuses on the Web’s evolution and its impact on society, business, and government. In “The Web Science Observatory,” Thanassis Tiropanis and his colleagues outline the distributed and collaborative Web Observatory project that supports this study with its emphasis on interdisciplinary analysis and providing multilevel analytics on a global scale.

Mobile applications are becoming ubiquitous, easy to use, and valuable to millions of users, but the growing number of native platforms and frameworks introduces complexity in the decision-making process for creating them. In “Mobile Web Apps,” Nicolás Serrano, Josune Hernantes, and Gorka Gallardo examine options for building mobile Web apps and outline considerations for selecting the most suitable development approach for a given situation.

Securing Web applications has become a major challenge in the face of dangerous flaws that leave them vulnerable to security attacks and risk. As several high-profile security breaches have recently revealed, many organizations and application developers ignore or ineffectively address the security issues and vulnerabilities upfront during the design and development phase. By not addressing vulnerabilities proactively and early on, organizations leave themselves open to devastating consequences. In the final article, “Web-Application Security: From Reactive to Proactive,” John Maguire and H. Gilbert Miller discuss how to proactively address vulnerabilities early on to avoid the devastating consequences of a successful attack.

Besides Tim Berners-Lee who created the Web, a few other pioneers are responsible for the Web’s popularization via user-friendly Web browser and for greatly enhancing Web’s utility and value via Web search engines. The article, “Masterminds of the World Wide Web,” by George Strawn recognises these masterminds and highlights their contributions that led the Web to what we take it granted today.

In the video segment in this issue, Bebo White, who became involved with WWW development while on sabbatical at CERN in 1989 and was instrumental in establishing the first non-European Web site at SLAC in 1991, shares his views on the Web’s evolution, impact, and challenges.

The Web is poised to become an even more dominant platform than it is today and will be more exciting than the current one. We’ll embrace it in many innovative, currently unimaginable ways. Yet, it will require us to address a range of technical, developmental, operational, organizational, political, and societal issues and challenges.

We’re entering a new era of the Web, which will be driven by Semantic technologies, Web 3.0 and 4.0, as well as the Web of Things, Internet of Everything, RFID, smartphones, gadgets, and consumer electronics, cloud computing and cloudlets, multimodal access and presentation, and open standards and open source software. New types of Web apps on the horizon will be more ubiquitous and smarter than current apps and will be accessible anytime, anywhere, and from any device.

The Web will also reach billions of people at the bottom of the socioeconomic pyramid who have not yet had the opportunity to embrace and benefit from it.

The Web’s full potential remains unknown, though seemingly vast. At this stage, it’s anybody’s guess what it will be like in another 25 years. That will depend on what we want it to be. As computer scientist Alan Kay has advised, “The best way to predict the future is to invent it.” That said, in embarking on our journey toward the new Web landscape, we should recognize that the Web is a means to an end rather than the end itself.

Help to Create the Future Web

As we celebrate the Web’s 25th anniversary, there’s much to think about, reflect on, and anticipate about the future Web.

What do you think it will look like in 25 years? What novel applications are on the horizon? How will we embrace the future Web? What new challenges will it pose for us? What must we do as a community to build a better, safer, open Web that addresses the needs of various segments of the society and reaches all people around the globe?

Please share your thoughts in the comments section below or send an email to san[at]computer[dot]org.

San Murugesan is editor in chief of IT Professional, the director of BRITE Professional Services, and an adjunct professor at the University of Western Sydney, Australia. He is a corporate trainer, a consultant, a researcher, and an author. He is coeditor of the forthcoming Encyclopedia of Cloud Computing (Wiley 2014), as well as Harnessing Green IT: Principles and Practices(Wiley 2012), Handbook of Research on Web 2.0, 3.0, and X.0: Technologies, Business, and Social Applications (IGI-Global 2009), and Web Engineering (Springer 2001). Murugesan is an editorial board member of Computer and edits its bimonthly column, “Cloud Cover.” He is a fellow of the Australian Computer Society and the Institution of Electronics and Telecommunication Engineers (IETE), as well as a distinguished visitor of the IEEE Computer Society. Contact him via email san[at]computer[dot]org, @santweets, LinkedIn or his Web site.