Interview Series
Diversity in STEM with Dr. Juan Gilbert
Share this on: 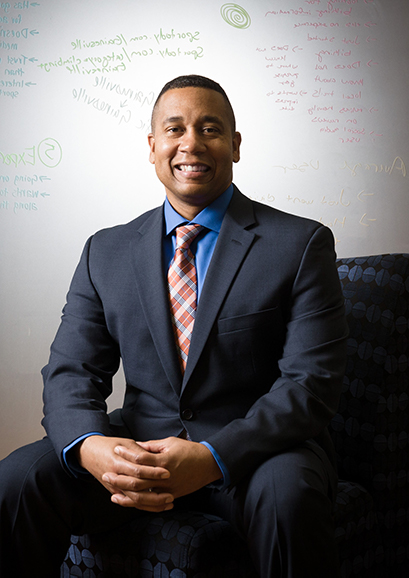 The Diversity and Inclusion Task Force presents Diversity in STEM, with Juan Gilbert, the Andrew Banks Family Preeminence Endowed Professor and Chair of the Computer & Information Science & Engineering Department at the University of Florida where he leads the Human Experience Research Lab. He is a Fellow of the Association of Computing Machinery (ACM), a Fellow of the American Association of the Advancement of Science (AAAS), and a Fellow of the National Academy of Inventors. Dr. Gilbert was also named one of the 50 most important African-Americans in Technology.

We are thrilled to bring you our discussion on his career growth, overcoming challenges, and how volunteering with IEEE Computer Society has given him a global perspective to computing.

Why did you choose your current technical field?

Dr. Juan GilbertI chose my current field because I took a programming course early in my college years and I loved it. Furthermore, my current profession enables me to use science and innovation to address real world problems that impact people.

Dr. Juan GilbertThe greatest challenge was pursing the PhD in isolation, specifically, not knowing any other Black/African-American CS PhDs was a challenge. I thought I was the only one for years. The greatest reward is my students and the impact of our research. When my students achieve their degree, publish their first paper, receive awards, etc. this is the greatest of all rewards for me. When our research influences policy or transitions into the real world, that’s another tremendous reward.

What have you found rewarding about being an IEEE and/or Computer Society member and/or volunteer?

Dr. Juan GilbertThe community is very rewarding. Connecting with others in the field via IEEE Computer Society is the greatest benefit/reward for me.

Dr. Juan GilbertI was the first in my family to go to college. My father had an 8th grade education. He fought in the Korean War. My mother graduated from high school. So, I didn’t have any role models for college. Furthermore, when I was an undergraduate student, I had never seen an African-American CS professor or PhD. So, it never occurred to me that I could be a professor. Dr. David Haddad who was a Professor at Miami University pulled me aside one day and told me that I would be a great professor. He told me that I should get my PhD and if I did, he would hire me. Until that moment, it never occurred to me that being a professor was a career option for me. And, that very moment changed my life forever.

Dr. Juan GilbertIn my opinion, to have a successful career in CS or technology, you must be innovative. I think this is probably well known and doesn’t surprise anyone. However, I would also say, you need to be a communicator. You need to be able to translate or communicate your innovations to non-technical people. If you can work with people who are not like you, e.g. non-technical, and you can communicate with them about your technology, you have the ability to be very successful.

What podcasts do you currently listen to?

Dr. Juan GilbertModern Figures Podcast. I like the fact that the Modern Figures podcast highlights women doing great things. They are inspirational and their stories really move people, e.g. young women, to realize they, too, can achieve.

What book are you currently reading?

Dr. Juan GilbertRight now, I am not reading any books. I am really focused on some new research in the lab. However, I would recommend, Race After Technology by Rhua Benjamin.

What was your first job?

Dr. Juan E. Gilbert is the Andrew Banks Family Preeminence Endowed Professor and Chair of the Computer & Information Science & Engineering Department at the University of Florida where he leads the Human Experience Research Lab. Dr. Gilbert has research projects in election security/usability/accessibility, advanced learning technologies, usability and accessibility, Brain-Computer Interfaces (BCI), Human-Centered AI/machine learning and Ethnocomputing (Culturally Relevant Computing). He has published more than 250 articles, given more than 250 talks and obtained more than $28 million dollars in research funding. He is an ACM Fellow, a Fellow of the American Association of the Advancement of Science and a Fellow of the National Academy of Inventors. In 2012, Dr. Gilbert received the Presidential Award for Excellence in Science, Mathematics, and Engineering Mentoring from President Barack Obama. He also received the American Association for the Advancement of Science (AAAS) 2014 Mentor Award. He received the 2021 ACM SIGCHI Social Impact Award. Dr. Gilbert received the 2018 Computer Research Association’s A. Nico Habermann Award. He was also named a 2015-2106 AAAS-Lemelson Invention Ambassador, Speech Technology Luminary by Speech Technology Magazine and a national role model by Minority Access Inc. Dr. Gilbert is also a National Associate of the National Research Council of the National Academies. Dr. Gilbert was named a Master of Innovation by Black Enterprise Magazine, a Modern-Day Technology Leader by the Black Engineer of the Year Award Conference, the Pioneer of the Year by the National Society of Black Engineers and he received the Black Data Processing Association (BDPA) Epsilon Award for Outstanding Technical Contribution. In 2002, Dr. Gilbert was named one of the nation’s top African-American Scholars by Diverse Issues in Higher Education. In 2013, the Black Graduate and Professional Student Association at Auburn University named their Distinguished Lecture Series in honor of Dr. Gilbert. Dr. Gilbert has testified before the Congress on the Bipartisan Electronic Voting Reform Act of 2008 and the U.S. House Committee on Administration for the “2020 Election Security – Perspectives from Voting System Vendors and Experts” In 2006, Dr. Gilbert was honored with a mural painting in New York City by City Year New York, a non-profit organization that unites a diverse group of 17 to 24 year-old young people for a year of full-time, rigorous community service, leadership development, and civic engagement.