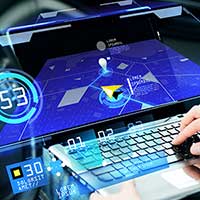 In December 2016, the IEEE Computer Society released its annual vision of the future of technology. “Self-driving cars” is near the top of the list of trends that will reach adoption in 2017. This probably isn’t surprising to most of us, given the substantial media attention and hype already surrounding self-driving cars. Perhaps more surprising to some is that the automotive industry is also deeply involved in nearly all of the other trends in the Computer Society’s list: industrial IoT, AI, 5G, ubiquitous sensors — even hyper-converged systems and disaggregated memory. The modern car really is becoming a “computer on wheels” as the automobile industry emerges as a powerful force in developing and implementing new technologies. In recognition of that fact, IEEE Software’s upcoming May/June 2017 issue focuses on the central role that software now occupies in the automobile.

The automotive industry is undergoing enormous transformation as it contends with challenges in ensuring passenger safety, opportunities for advancing the software state of the art at vast scales, and new business models that will upend our entire concept of transportation. This May 2017 Computing Now theme includes three articles, an industry video, and a sidebar with additional resources to further the discussion.

In “Digital Services in the Automotive Industry,” Jilei Tian, Alvin Chin, and Michael Karg explore software’s rapidly changing role in the automotive industry due to the incursion of software producers such as Google and Apple, who have upended the conception of software as a mere implementation element in the traditional automotive manufacturing process. The software producers have introduced unfamiliar business models involving IT services that engage owners beyond the traditional driving experience and reach into their broader personal sphere. Automakers are now responding with their own digital service platforms and offerings.

Christof Ebert’s “Implementing Functional Safety” describes the automotive industry’s ongoing efforts to guarantee safety in ever-more-complex driving scenarios. Ebert guides us through the key activities defined in the ISO 26262 standard for automotive functional safety, which has become a model for modern, goal-oriented safety standards. The article highlights particular innovations in the standard, such as a set of new metrics for demonstrating the robustness of the overall automotive electronics system architecture.

In “Computer, Drive My Car!” Shaoshan Liu, James Peng, and Jean-Luc Gaudiot offer a concise preview of what the automotive future holds — including the software improvements needed to get us there and the benefits that await us when we arrive. The article identifies AI, cloud computing, sensor fusion algorithms, and reliable real-time operating systems as key areas for advancement. The authors argue that the development of intelligent road infrastructure will create a cycle of big data generation and accelerated software improvement. They predict that these advances will ultimately lead to a new era of fully autonomous transportation that virtually eliminates traffic fatalities and revolutionizes fuel efficiency.

In this month’s video, guest editor Christof Ebert provides an overview of automotive software’s evolution. Evolving functionality, distributed development, and rising liability risks all contribute to rapid growth in the software’s complexity. Other challenges include:

To help cope with complexity and other challenges, a new three-tier automotive software architecture will be introduced over the next few years. The video compares this architecture to modern IoT reference architecture.

As exciting as the present state of the automotive industry is, the future promises to be even more stirring, and software will play a central role. Much as the US space program of the 1960s was a beacon lighting the way to innovations in the software industry, today’s automotive industry is a leading source of challenges and opportunities for software researchers and developers alike.

For a more detailed examination of the challenges and potential of autonomous cars and the changing role of software in the automotive industry, we encourage you to read the following additional articles.

Christof Ebert is the managing director at Vector Consulting Services. He supports clients around the world in improving product strategy and product development and managing organizational changes. Ebert has a PhD in electrical engineering from the University of Stuttgart. He’s on the IEEE Software editorial board. Contact him at christof.ebert@vector.com.

John Favaro is a senior consultant at Intecs in Pisa, Italy, where he carries principal responsibility for automotive functional safety and cybersecurity initiatives. Favaro has an MS in electrical engineering and computer science from the University of California, Berkeley. He’s IEEE Software’s associate editor for Management. Contact him at john.favaro@intecs.it.