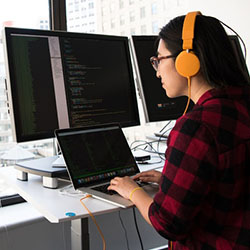 The technology industry has been on quite a roll for the last decade. Coming off of the 2008 financial crisis, it was one of the few sectors that exploded into a new period of growth, which has powered it until this day. Alongside it, job growth in the IT industry followed a similar path, even developing severe shortages of workers in a variety of sub-sectors and driving salaries up almost across the board. All along, it seemed that nothing could stop the industry from enjoying a second straight decade of growth.

Of course, nobody counted on the coronavirus (COVID-19) pandemic bringing the global economy to an abrupt halt and creating an unemployment surge not seen since the worst days of the Great Depression. Now, the tech industry is coming to grips with a situation that seems to evolve by the minute. It’s reshaping the IT labor market in ways that are only now starting to come into focus. Here’s a look at what some of the early workforce data shows and what effects that might have on the near future of the IT industry.

Since the coronavirus shutdowns first began, there’s been something of a narrative within industry circles that businesses would need to pivot and ramp up IT hiring to support legions of suddenly-remote employees. According to data from Burning Glass Technologies, though, that hasn’t happened. In fact, throughout March, job postings in the IT industry fell by 42% in aggregate. That’s just one percentage point better than the average for all types of jobs, proving that the IT sector was as vulnerable as any other to the uncertainty caused by the coronavirus. A closer look at some of the data, however, reveals that the drop-off hasn’t affected every IT job type equally.

The Telltale Signs of a Strategy Shift

What seems to be happening is that companies have in fact pivoted in response to the crisis, but not in the exact way many expected. According to data from technology recruiter Dice, there’s been a drop in demand for software developers and network engineers, but a big boost in demand for cybersecurity professionals as well as systems engineers and administrators. That trend does reflect that firms are prioritizing managing and maintaining their digital systems as they adjust to all new modes of operation. It’s just that companies have more than offset their necessary new hiring by putting other IT projects and priorities on hold and cutting staff elsewhere.

On top of the available job posting data, there’s also some strong anecdotal evidence that the IT sector is likely to emerge from the coronavirus pandemic looking quite different than before. Recruiters in the industry are already predicting as much as a 20% reduction in salaries for IT engineers. That’s significant when you consider that, according to ComputerCareers, engineers were the highest-paid subgroup in the IT sector. Combined with the weakening demand, this is a sign that every level of the IT workforce will be adversely affected by the current situation. The only real questions that remain are how long the rebound will take and if there’s anything job-seekers can do to minimize their losses in the meantime.

The Near-Term Effects and Strategy

Like the pandemic that’s causing the problem, it’s difficult to get a handle on how things will play out for the IT sector in the near future. The one thing that seems certain, though, is that what’s happening right now is going to leave a lasting mark on the industry that won’t fade away anytime soon. For those working in the IT sector, though, there is one bright spot to focus on. It’s that so far, the nation’s up-and-coming tech hubs have been somewhat resilient against the trends overtaking the market. That means workers might never find a better time to relocate (if they have the means), as it’s an option still available, even now. In some situations, they may even end up in an area with a lower cost of living than the one they’re leaving, which would be a welcome bonus.

For those getting started on a career in IT, there’s a good lesson in what’s happening as well. It’s that there are some kinds of IT jobs that won’t ever go out of style, even in the face of a global health crisis. The most obvious among them is any role connected to cybersecurity. It’s a field that was in high demand even before the present developments roiled the labor market. Now, with digital attacks seeing a sharp rise as the world’s attention is elsewhere, that demand has become astronomical.

So, the bottom line here is that while the coronavirus crisis has upended the IT labor market, it has done little to alter some of the industry-defining underlying trends that already existed. If anything, it seems to have accelerated them. The hottest technology hubs still seem to be humming along, except with less competition from other locales, and cybersecurity is still a central focus for most firms. That may point toward a recovery for the tech sector that will resemble its rise after the 2008 crisis – which would be an outcome the whole IT world will be happy to be a part of.