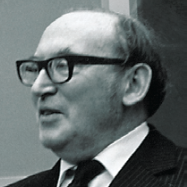 Maurice V. Wilkes was born in England in 1913. He attended Cambridge University in 1931 and studied mathematical physics and other subjects. In 1934 he became a graduate student in the Cavendish Laboratory doing experimental research on the propagation of radio waves in the ionosphere. This led to an interest in tidal motion in the atmosphere and computing methods. When he returned to Cambridge in 1945 after war service, he became head of the Computer Laboratory, then called the Mathematical Laboratory.

In the summer of 1946, Wilkes attended the famous Moore School lectures on electronic computers in Philadelphia, after which he worked on the EDSAC. In 1951, he published with two colleagues the first book to appear on computer programming. At this time, he put forward his proposals for microprogramming, a system which later became adopted widely in the industry. In 1965, he published the first paper on cache memories, followed later by a book on time-sharing.

In 1974, it appeared to Wilkes that the time had come when LANs based on traditional telecommunication technology might be replaced by networks of much wider bandwidth based on computer technology. The design study for what became known as the Cambridge Ring was published in 1975. The Cambridge Model Distributed System, a pioneering client-server system, described by Wilkes and Needham in 1980, was based on this ring.

Since 1980 Wilkes has worked in industry, first with DEC in Massachusetts and later with the Olivetti Research Laboratory in Cambridge, England (now AT&T). In 2002, Wilkes returned to the Computer Laboratory, University of Cambridge, where he is an Emeritus Professor.

Wilkes is a Distinguished Fellow of the British Computer Society, a Fellow of the Royal Society, and a Fellow of the Royal Academy of Engineering. He is a Foreign Associate of both the US National Academy of Sciences and the US National Academy of Engineering. In 1981, he received the Faraday Medal from the Institution of Electrical Engineers and in 1992 he received the Kyoto Prize for Advanced Technology. In 1967, Wilkes delivered the ACM Turing Lecture and in 1980 he received the Eckert-Mauchly award from the IEEE Computer Society and the ACM. His books include Memoirs of a Computer Pioneer (MIT Press, 1985) and Computing Perspectives (Morgan-Kaufmann, 1995).