The 4 Most Important Networking Trends in 2020 and Beyond

By Andrej Kovačević
Visit our Jobs Board 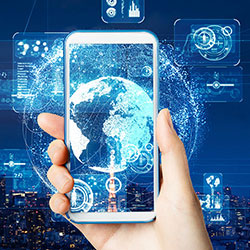 In today’s digital world, networking technology is everything. It’s what makes the internet possible. It’s how businesses support sprawling multinational footprints. It’s even stitching together the appliances in our homes into one, smart, convenient fabric.
For all of its importance, though, networking technology as a whole doesn’t tend to change much. For example, the internet itself runs on an iteration of a protocol that’s now 40 years old. Most of the developments in networking over that time have revolved around capacity and speed – not capability.
As we move into the 2020s, though, there are a number of trends and technologies that are poised to create real change in the world of networking. Here are the four most important ones among them.

Without a doubt, the biggest networking technology development of the 2020s is one that’s going to be all around us very soon – the deployment of next-generation wireless networks. In the mobile networking arena, it’s the 5G standard that’s going to rewrite the rules of what’s possible for technology on-the-go. It’s these new cellular networks that are going to unleash the true potential of things like augmented reality and the IoT, as well as bringing us closer to a world filled with “smart everything“.
Indoors, the wireless revolution’s going to be led by Wi-Fi 6, the soon-to-go-mainstream standard that’s making its way into devices right now. It will not only triple the theoretical maximum throughput of its immediate predecessor, but will deliver better indoor signal penetration and support greater device density. In a world where every electrical device is gaining networking capabilities, the effects of Wi-Fi 6 can’t be overstated.

Over the course of the last decade, cloud providers, SaaS and IaaS solutions, and mobile computing have come to challenge the traditional notion of boundary-driven networking. In the past, corporate and other private networks were animated by the concept of fenced-off access using firewalls and other location-centric controls. Now, as business computing assets have started to spread to remote data centers and mobile systems, a new concept has emerged – software-defined wide area networks (SD-WAN).
This new paradigm in networking makes it possible to use a variety of network interconnections to create a private business LAN analog consisting of assets in the cloud, data centers, and branch offices that function like a single, seamless system. More than anything, this is made possible by continued improvements in WAN link bandwidth, which now allow geographically disbursed resources to move data at or near LAN speeds across vast distances. As the 2020s wear on, SD-WAN will come to replace traditional hardware-based onsite networking approaches.

One of the glaring deficiencies in the internet’s infrastructure has always been a lack of built-in data security and privacy features. That reality is increasing the pressure on website operators, app developers, and networking vendors to take steps to make encryption a part of their platforms as a means of making up for the underlying insecurity of the networks they rely on. And even though the tech media would have you believe that users looking for ways to watch any country’s Netflix is what’s driving the increase in the use of consumer VPN services, it too is a result of the push toward encryption everywhere.
In the networking world, the push for encryption everywhere hasn’t gone unnoticed. It has in fact spurred hardware developers toward making encryption at the network layer a standard feature of their hardware going forward. It’s become so important that estimates now believe that the network encryption market will be worth $5.8 billion by 2026, almost doubling in size in little more than five years.

One of the biggest results of the explosion of networking technology over the past 40 years is that it has revolutionized the way that we communicate. The internet began by displacing switched telephone networks as the primary means of real-time communication around the globe, and in the years since has spawned myriad ways for people to talk to one another.
The result has been a fragmented communications environment that networked systems often struggle to keep up with. Between traffic shaping and prioritization to support VoIP protocols and managing the traffic generated by innumerable over-the-top messaging platforms on computers, tablets, and smartphones, the lack of standardization has been tough to navigate. In the 2020s, though, a trend toward Unified Communications as a Service (UCaaS) solutions aims to reset the landscape and allow network hardware developers to move away from supporting multiple application-specific protocols and specifications.

Judging by these and other trends now reshaping the world of networking, the 2020s are going to see the technology landscape in that field change significantly. Many of the longest-held concepts and traditional infrastructures will be replaced with more modern ones that take the needs of next-generation connected devices into account. In many ways, the idea of data networks themselves will be updated to reflect the new reality of border-free, seamless connectivity that we have now come to expect.
There’s sure to be plenty of hurdles to overcome and obstacles to the remaking of networking technology as we’ve known it, but one thing is clear: networking technology, which has remained mostly unchanged for much of its history, is due for disruption on several fronts – and it’s coming in more ways than anyone is likely to be able to foresee. It’s going to make it an interesting time to be a networking professional, and that part is certain.