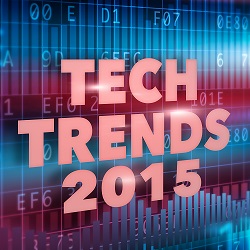 1) Time is Right for Wearable Devices

Apple in 2015 will join other device makers in launching watches that not only tell time but allow messaging, email, calendars, and fitness apps.

Imagine a wearable device that tells time, sends and receives email and messages, makes calls, and even tracks your exercise routines. Smartwatches hitting the market do all that and more. Both established players and small startups in 2015 will be actively involved in developing new devices, applications, and protocols for the wearable electronics market, which Juniper Research expects to account for $53 billion in sales by 2019. Apple Watch, a potential game changer, will join Microsoft’s Band, and Android Wear-based smartwatches from Motorola, Samsung, LG, HTC, and Asus, in competing for a share of the growing smartwatch market. Likewise, users, mobile application and hardware developers, network operators, content providers, and regulatory authorities will be working to better understand the capabilities of wearable devices.

2) Internet of Anything Becoming All-Encompassing

The reality that up to 50 billion things will be connected on the Internet by 2020 is sinking in: sensors and smartwatches, smart meters and smartphones, washing machines, fridges, wearable devices, and much more. The Internet of Things, Industrial Internet, and Internet of Everything in 2015 will morph into the Internet of Anything. IoA envisions a common software “ecosystem” capable of accommodating any and all sensor inputs, system states, operating conditions, and data contexts — an overarching “Internet Operating System.” IoA also suggests contextually and semantically integrated information. As a sign that the world is preparing for this great wave of connectivity, British telecommunications company Arqiva has announced plans to build a national network next year using ultra-narrowband technology suitable for connecting objects over long distances.

As the volume of data explodes, along with the means to collect and analyze that information, building security into software design and balancing security and privacy are becoming top priorities.

The exponential growth of large data repositories of personal and corporate information, combined with the ability to analyze and collect that data, is creating an urgent need to reconsider security and privacy tradeoffs. Malevolent actors such as adversarial governments, criminals, business competitors, and malcontents have a growing ability and determination to gather information about individuals, businesses, and even critical infrastructure. Citizens, corporations, and other groups accept; certain level of intrusion, provided a certain level of security is afforded. Every person, corporation, and group, however, has a different level of sensitivity to intrusion and a different notion of acceptable security risk. In 2015, after a year of unprecedented security breaches, expect to see continued focus on balancing security and privacy, along with growing momentum to provide software developers with the tools to create more secure software.

4) The Age of Software-defined Anything (SDx)

Industry gears up to tackle interoperability issues and adopt standards as idea of using software to control hardware takes hold.

The concept of Software-defined Anything (SDx), using software to control hardware, is an idea in its early stages. Encompassing Software-defined Storage, Software-defined Infrastructure, Software-defined Data Centers, and Software-defined Networking, at its heart, SDx is about data center interoperability and infrastructure programmability. Driven by automation and DevOps, SDx takes network centralization and virtualization, and especially network control, into the cloud. Similar to the smartphone ecosystem, Software-defined networking’s programmability will turn various network appliances into a warehouse of apps. Manageable, cost-effective, and adaptable in keeping with today’s high-bandwidth, dynamic applications, SDN architectures decouple network control and forwarding functions, allowing network control to be programmable and the underlying infrastructure to be separated from applications and network services. Several standards groups are working on interoperability issues, including the Open Networking Foundation (ONF), the Internet Engineering Task Force (IETF), the European Telecommunications Standards Institute (ETSI), and the International Telecommunication Union (ITU).

The celebrity photo hacking scandal and iCloud breach in China in 2014 has brought cloud security to the forefront for 2015. According to IBM’s annual CISO study, over the next year, nearly one-half of chief information security officers expect a major cloud security breach in the future that will cause a substantial number of customers to switch providers. Enterprises are moving workloads to the cloud and expecting enterprise-level security. Although cloud computing provides an effective way to address the constraints of limited energy, capabilities, and resources, security and privacy protection has become a critical concern in the development and adoption of cloud computing. With cloud computing, an outside organization controls access, security policy, and the data center. Currently, according to IBM, three-quarters of security breaches take days, weeks or even months to be discovered, significantly increasing the damage inflicted by attackers. To avoid system fragility and defend against vulnerabilities exploration from cyber attackers, various cybersecurity techniques and tools are being developed for cloud systems.

Next year will see production of the first 3D-printed car. According to Local Motors, consumers will be able to select their car’s features and within 40 hours and for under $30,000, have a completed model to drive off. The 3D-printed car is just one of hundreds of uses that enterprises and consumers are finding for 3D printing, which will revolutionize manufacturing by lowering costs and time to market. Also in 2015, sales of 3D printers are expected to take off, driven by low-cost printing and uptake by a variety of industries, including aviation, automotive, consumer goods, jewelry, food, and medicine. According to Gartner, sales of 3D printers will double each year between 2015 and 2018, and exceed sales of more than 2 million.

7) Telling the Future with Predictive Analytics

Business intelligence in 2015 will be less about examining the past and more about predicting the future. Predictive analytics, an emerging area of data mining, involves extracting information from data and using it to predict trends and behavior patterns.  While predictive modeling techniques have been researched by the data mining community for several decades, they are now impacting every facet of our lives. New methods are being applied in areas such as homeland security, infrastructure management, intelligent transportation, healthcare and bioinformatics, text mining, and social media. In organizational settings, predictive analytics has gained widespread adoption over the past decade as firms look to compete on analytics.

Mobile apps using augmented reality can help the colorblind see colors, travelers explore unfamiliar cities, shoppers imagine what they look like in different outfits, and even help drivers locate their parked cars. Virtual reality research received much attention in the 1980s, but didn’t take off due to the expensive hardware, including sensing, rendering, and display equipment. But the availability of inexpensive graphics cards and sensors, and the popularity of applications in such areas as gaming and virtual worlds, is bringing it into the mainstream. Juniper Research estimates that by 2017, over 2.5 billion mobile augmented reality apps will be downloaded to smartphones and tablets per year.

The way we deal with our health is undergoing a major transformation, not only because mobile Internet technology has made it possible to have continuous access to personal health information, but also because breaking the trend of ever-growing healthcare costs is increasingly necessary. Estimates indicate that more than 70 percent of the world population will have a smartphone by 2017. Connectivity, interoperability, sensing, and instant feedback through smartphones all provide new opportunities for gaining insights into our health behavior. Such insights are improving, and understanding what motivates people to make healthy changes throughout their lifetimes is becoming more important. Internet technology not only lets us continuously monitor an individual’s physiological and psychological state, but also allows for building up a lifelong record of physical, mental, and social health.