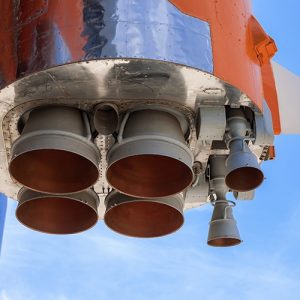 For many years, scientists studying Mars have asked themselves, “Where did the atmosphere and water go?”

The key lies in understanding how solar wind plasma interacts with Mars’ atmosphere. Scientists believe Mars used to have a strong magnetic core that held its atmosphere together, but the low-density iron core grew weaker. Now, charged particles from Mars’ upper atmosphere, feeling the pull of the electric field generated by the solar wind, pick up enough energy to escape into space and erode Mars’ atmosphere.

But there have been challenges in testing that theory, mostly because of the wildly uneven distribution of Mars’ crustal magnetic fields.

“It’s computationally challenging to properly model the Martian plasma environment due to the complex nature of the interaction,” write Yingjuan Ma and her colleagues from UCLA and the University of Michigan in “Understanding the Solar Wind–Mars Interaction with Global Magnetohydrodynamic Modeling” published in the July/August 2017 issue of Computing in Science & Engineering. (login may be required for full text)

Previous model results have been validated with observations from many Mars missions, most specifically the ongoing MAVEN (Mars Atmosphere and Volatile Evolution) mission, which carries on board a full set of plasma instruments and provides an excellent opportunity to further understand the complicated interaction process.