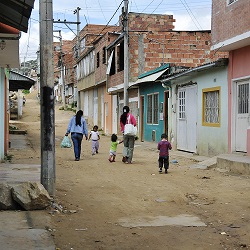 Many of the major cities in Latin American face ongoing challenges of violence and economic inequality.

That’s why researchers from Switzerland and Mexico have created SenseCityVity, a program to help the young citizens (high school students, ages 16–18) of Guanajuato City, Mexico—one of the most important mining towns in the 16th century—define, document, and reflect on their city’s problems.

Ten teams of ten members each were tasked with documenting the conditions of their city—many of which centered on piles of uncollected garbage, power lines installed too close to rooftops, vandalism, drugs, and insufficient transportation.

As one participant noted, “Transport does not come in time or is very scarce, or things like that, which affect us [in getting] to school; this problem affects the majority of us.”

Another participant said, “The problem here is that there is a lot of insecurity, in the alleys, outside the downtown area. At night there are people drinking and smoking marijuana in the street alleys. We used to play by the Hidalgo market every day. But now we are limited because of insecurity; things can be complicated, and we are limited to go outside.”

Read more about identifying and addressing the complex issues of those living in Latin American inner cities in the April—June 2017 issue of IEEE Pervasive Computing. (login may be required for full text)