Step Into a Shipping Container and Emerge in Southern Italy: Virtual Reality Tourism Now Tries to Sell You a Trip to Apulia
By Lori Cameron 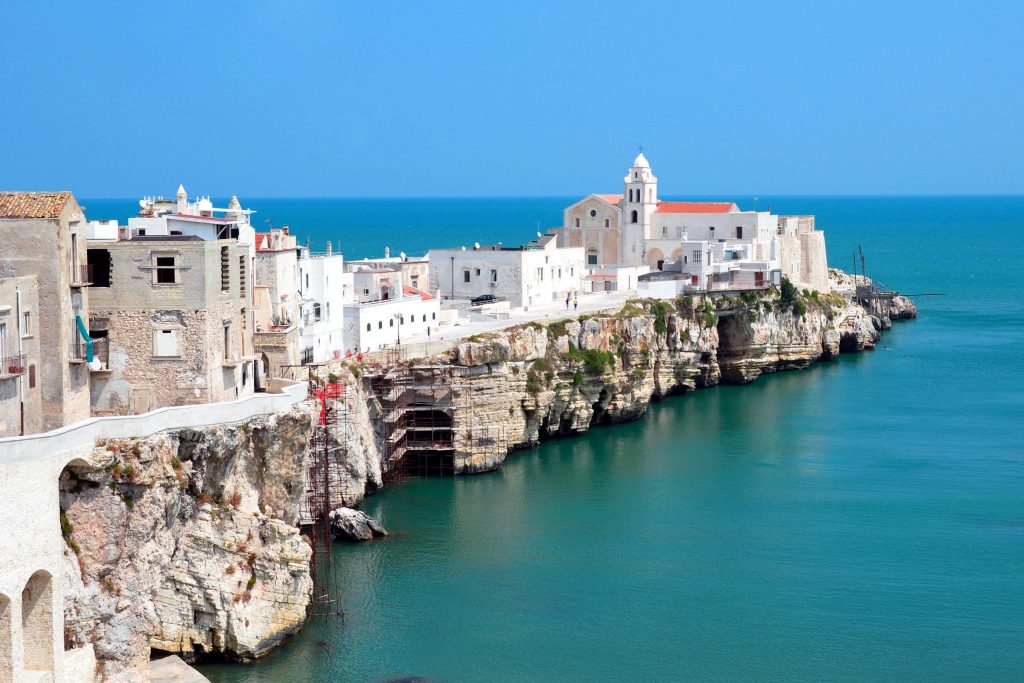 Imagine stepping into the back of a shipping container and being transported to the southern coast of Italy, replete with frescos, ocean spray, and the smell of wild gooseberry and fennel.

It’s a virtual reality experience called MATE, and it’s coming to a travel and tourism event near you.

Once the domain of only the super wealthy, recent advances in virtual reality now make it possible for anyone to travel to exotic places around the world—with simulated waterfront mist to feel on your face and countryside fragrances to smell.

Researchers in Italy’s bootheel have leveraged a piece of old “virtual environment” technology that failed in the 1960s, and have resurrected it by applying the latest VR and human-machine interface.

That old tech was a motorbike simulator that allowed users to sit in a real saddle and experience a virtual ride with sound, vibrations, winds, and even smells. The Sensorama simulator failed, however, because of financial issues and “technical immaturity,” said researchers at Polytechnic University of Bari, located in the capital of southern Italy’s Apulia region.

Now, that old motorbike simulator tech is being redesigned and reconfigured to fit inside a 20-foot shipping container, transporting visitors to Apulia.

Called the Multisensory Apulia Touristic Experience (MATE), the VR inside the container could help the beleaguered economy in a region of Italy that’s referred as the heel of Italy’s boot. Apulia is a charming town but has one of the country’s weaker economies, researchers say, with “17.70K Euros gross domestic product per inhabitant versus 32.20K Euros in northwest Italy in 2014.”

See the art, history, culture, and natural wonders of Apulia, Italy (aka “Puglia”)

Even with the success of recent travel promotions, local authorities from the little-known town of Apulia, Italy wanted to explore new ways to promote the beauty and culture of their area by partnering with researchers from Polytechnic University of Bari and investing in virtual reality research.

“The local authorities are exploring new ways to promote it and have agreed to invest in application-oriented virtual reality research,” the authors say.

Their hope is that a virtual reality experience will help boost tourism in their part of the country.

“Apulia offers a range of attractions, from the unique and remarkable trulli in Alberobello and the magnificent Castel del Monte in Andria to the crystal-clear waters surrounding the Tremiti Islands and the outdoor adventures that await in the Murgia National Park. The region is soaked in tradition and folklore, and its food and wine specialties are known all over the world,” say the authors.

Drawing inspiration from the Sensorama simulator that was invented in the 1960s by Mort Heilig, the Italian researchers designed MATE to bring the sights, smells, sounds, and climate of Apulia to potential travelers in their respective home towns — with the tourism goal of luring them to visit Italy’s bootheel.

So, what is it like to enter this immersive environment?

MATE: It feels like climbing into the back of a truck with your friends

For event staff, the environment is portable and easy to use

“We designed MATE as a virtual tour in collaboration with industrial partners and local tourism authorities, who played an active part in defining the system’s requirements and features. One of the main design requests was to build a mobile platform that could be relocated to various promotional events all over Europe, such as public exhibitions and fairs. Also, to minimize the operating costs, the system needed to be simple enough that it could be run by a small number of unqualified staff,” say the authors.

“MATE enhances the user experience by providing olfactory and climatic stimuli. As users take the tour and enter a new scene, the humidity, lighting, and ambient scents change accordingly. To convey the olfactory stimuli, we used an array of odor diffusers using the Solid Fragrance Release system from Oikos Fragrances. Odors are delivered using a ventilation fan in the mobile container,” they write.

In selecting visual tech, the team had to take into consideration that awful, queasy feeling users get when playing 3D games.

“For the visual stimuli, we chose 2D rather than 3D footage for the virtual tour. There were many reasons for this choice, but the most important was to avoid the cyber-sickness effect. Cyber-sickness can cause discomfort and even vertigo when the users are standing in a restricted environment, which could cause visitors to fall or cause other potentially dangerous situations. In our tests, we encountered a high rate of cyber-sickness among casual users with short or no training time and when the point of view could not be controlled individually. As a second consideration, the added value enabled by 3D depth perception is limited in virtual tours consisting of mostly landscapes and confined places,” they added.

Nonetheless, the panoramic view promises to be a lot of fun.

“Currently, the MATE system is being integrated into a full-scale prototype demonstrator that will be carried all around Europe. Based on our experience and feedback, we think that the use of 360-degree videos can further increase the wow effect and fun factor. Another suggestion from our case study participants was to use source images for the 360-degree panoramas, with as high a resolution as possible, so users can enjoy the zoom-in function to discover new details,” say the authors.

After testing, what were the results?

The researchers developed a VR experience using the Murgia countryside, showcasing its hidden treasures: the countryside’s native vegetation—thyme, wild gooseberry, and wild fennel, Monte Caccia, Cretacic limestone, doline fields and sinkholes and caves, the ancient Appian Way crossing the area, the Masseria Jesce—an ancient manor farm dating back to the 16th century, a 14th century frescoed crypt dedicated to the Archangel St. Michael, and even a local bakery with the accompanying smell of fresh-baked bread.

After surveying the test group, the research team found that the immersive, multisensory experience beat browsing internet pictures, hands down.

“Our participants indicated that their enjoyment was significantly higher in the MATE as opposed to using the PC with mouse interface,” the authors said.

The research team hopes the MATE system will be used to promote tourism in many other regions of the world.

“In the future, we plan to evaluate MATE in further tests to measure its usability, enjoyment and engagement, and user satisfaction. We believe that the versatility of MATE’s authoring system will make reusable it so other regions can use it for promotions as well,” said the team.