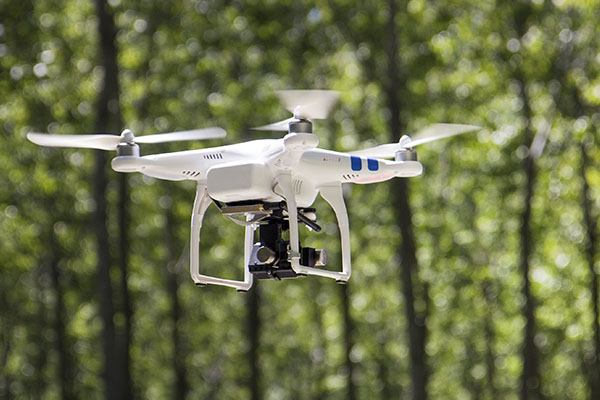 Unless you’re completely cut off from civilization (in which case you wouldn’t be reading this), drones are rapidly buzzzzzzzing their way into our lives. And the global market and impact is enormous. The Consumer Electronics Association, for instance, estimates about 425,000 drones will be sold this year, amounting to about $130 million in sales. By 2018, the annual market is expected to top $1 billion.

There are obvious security issues to be surmounted – to wit, the example of the allegedly inebriated man who in late January lost control of a drone and sent it over the White House fence.

“The drones identified and located people by the devices in their pockets, so that businesses could send highly specific ads to their smartphones,” said Atherton.

Albeit somewhat creepy, it’s not illegal, since location information isn’t considered private/personal data. But it’s yet one more example of how we’re slowly losing all semblance of privacy in our lives in the name of convenience.

And tech issues abound. Nicholas Roy, a Massachusetts Institute of Technology robotics professor who headed up Google’s drone-delivery project, said the industry remains in the prototype stage. “A sea change is going to be required in how these vehicles are designed and manufactured to support moving from a hobbyist flying on the weekend in a park to a 24/7 delivery service flying over your highways.”

The Wall Street Journal added that “like makers of laptops, smartphones, and electric cars, drones are trying to pack more energy into smaller batteries. The issue is especially acute for drones: the bigger the package, the more power needed to fly.”

While some companies, including chip makers Intel and Qualcomm – say the technology is getting closer – delivery drones can’t yet fly autonomously, since that requires software and sensors that can three-dimensionally map an environment.

Futurist Thomas Frey said recently that there’s an acute need for standards for all types of drones – these include ones for classification, capability, and interoperability. He also believes the US Federal Aviation Administration shouldn’t serve as the regulatory agency for drones.

“Just because drones and aircraft share the same skies doesn’t mean the two industries are enough alike to share the same regulatory body. In fact, aviation expertise may actually be a detriment to allow this industry to properly unfold,” noted Frey.

Frey itemized more than three dozen issues that need to be resolved before drone delivery will be commonplace.

Here are just a few:

Raffaello D’Andrea, a robotics expert, best summed up the challenges still to be surmounted. “People underestimate the technical difficulties. They watch YouTube videos and think this is great, why isn’t somebody delivering my pizza? It takes time and effort to make something the public doesn’t have to think twice about.”