The age of proprietary graphics chips

By the early 1990s the PC industry was still expanding and offering plenty of opportunity for all. IBM had lost its position of leadership and for a few years the market existed on commercial off the shelf (COTS) graphics chips from TI, and a bunch of XGA and VGA clone builders. In 1994 Number Nine, a small company in Boston, which had been selling me-too clone add-in boards (AIBs) surprised the industry with what would be the first of a series of proprietary custom graphics chips, they called it the Imagine 128. Number Nine had associated the company’s products and name with the Beatles (e.g., “Revolution, Imagine, Sgt. Pepper, Ticket to Ride, One After 901, Number Nine, Cloud Number Nine,” etc.).

Number Nine got its start in Cambridge, Massachusetts in 1982 by offering a MOS 65c02 microprocessor-based AIB for the Apple II. The company went on to develop a NEC µPD7220 AIB, and a number of  TI TMS 34010-based AIB. Later the company was the first to offer 256-color and true color AIBs. Such accomplishments raised the price of its AIB which limited the number of home computer consumers as customers.

In the mid- to late 1980s, the biggest opportunity and most challenging application for PC graphics boards was to accelerate AutoCAD and its competitor’s CAD programs. To accelerate CAD, the AIB suppliers developed clever ways of handling a display list, a series of instructions that told the AIB what to draw and where. Number Nine was selling a TI 34010-based AIB called the Pepper Pro 1280. It did one resolution (1280 × 1024) and had limited drivers running under NNios (Number Nine Intelligent OS). It did have a fast and rich AutoCAD display list processor; however, it was relatively expensive.

When PCs Got Their First 32-bit and 64-big Graphics

In the early 1990s, PC’s were getting the first 32-bit and 64-bit graphics, and the market was shifting as interest in 3D gaming and content creation began to develop. By 1993 there were 16 companies planning or offering a 3D graphics AIB, and in 1994 the number jumped to 30 companies. 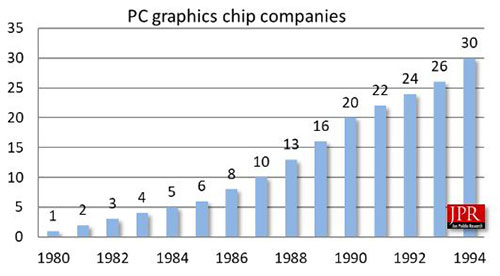 The early 1990s also saw the introduction of the PCI bus for accessory boards.

Number Nine knew it had to do something to break out of the pack and differentiate itself. The company had prided and positioned itself as a performance leader in graphics (although not everyone agreed) and so it took the bold move of committing to an ASIC, and “a big fat memory bus.” Graphics performance is heavily dependent on memory read-writes, and so the wider and faster the memory bus the higher the performance will be. Other than a little over-clocking of COTS VRAM, there wasn’t much one could do to squeeze more performance our of memory. But if one made a wider bus then more data (and graphics is an insatiable data consumption beast) could be moved faster.

The Early Days of Comdex in Las Vegas

But it was a race. In those days a conference in Las Vegas called Comdex was the premier place to announce and show off new PC products. All the dealers and OEMs went there to sell stuff to each other. Billed as a dealer’s showcase, it became a magnet for the press, and the civilians that could get in.

Number Nine was already sourcing its mainstream graphics chips from S3 for use in AIB’s for its retail consumer line and major OEM AIB market.  Knowing well in advance that S3 was going to make a big announcement of 64-bit graphics chips (Vision 964 (VRAM based) and Vision 864 – DRAM based)) at the 1994 Comdex Show, Number Nine jointly announced 64-bit AIBs at the same show.   But Number Nine caught everyone by surprise, stole the show and created a lot of buzz with the announcement of the world’s first 128-bit graphics chips, when everyone else was just announcing their 64-bit offerings.  It was a huge leap, the company’s first chip — and it worked right out of the gate on day one. 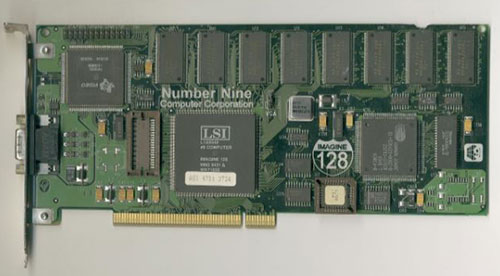 The Imagine 128 GPU introduced a full 128-bit graphics processor—GPU, internal processor bus, and memory bus were all 128 bits. However, there was no, or very little, hardware support for 3D graphics operations. Gouraud shading was added in the second version along with 32-bit Z-buffering, double display buffering, and a 256-bit video rendering engine.

The company brought out its second generation of the Imagine 128 (Imagine 128-II) in 1995 with an Intelligent Command Processor that was a VLIW processor which enabled the CPU to send multiple drawing commands directly into the graphics memory in a FIFO execution manner. The CPU was offloaded by a hardware DIB conversion (Microsoft Windows Device Independent Bitmap).

The video engine was separated from drawing engine and increased to 256 bits wide and 8 pixels per clock with bilinear interpolations. And it contained Number Nine’s first real 3D engine. The 3D engine could draw lines and Gouraud shaded triangles, do 16- or 32-bit Z-buffering, volume clipping, and spatial blending. The first implementation of the Imagine 128 II came with 4- or 8-MB of VRAM and later the company offered a less expensive version with a 4MB EDO-DRAM option. The graphics accelerators chip’s 100 MHz memory controller could handle 800 megabytes per second single ported performance with EDO-DRAM, and with VRAM even more. It came with a Direct3d driver and the company claimed it could do 610,000 Gouraud-shaded 50-pixel triangles per second in 16-bit color.

Like so many of its competitors, Number Nine suffered in the transition from DOS to a GUI based OS. And like its competitors it used a low-cost Cirrus Logic chip with 512kB to manage DOS calls. That ultimately proved inadequate for advanced DOS graphics applications including games. To fix it the company developed a proprietary BIOS that supported Imagine II under DOS and the company sent an upgrade to customers upon request.

Number Nine and its competitors got caught in the bus wars of the time. The PCI bus was introduced in 1993, replacing the VL bus introduced the year before, and then PCI was replaced by AGP in 1996 (I’ll have a separate article on that soon). So, Number Nine had to come out with an AGP version as well.

Also at the time the buses were changing, APIs were being developed independently, and there were four types of memory chips being offered, conventional DRAM, EDO-DRAM, VRAM from TI, and a newer, less expensive WRAM (Windows RAM — unrelated to Microsoft’s Windows) which was developed by Samsung for AIBs. WRAM was a high-performance dual-ported video RAM that had about 25% more bandwidth than VRAM. It had features that made it more efficient to read data for use in block fills and text drawing and could be used for very high resolution (such as 1600 × 1200) using true color. But Samsung never got a second source and in 2000 GDDR was introduced obsoleting WRAM and VRAM.

Nonetheless, the company found itself supporting three memory types and two bus types, while competing with three dozen other AIB suppliers — not an easy task combined with new versions of Windows, APIs and driver requirements.

In 1995 the company went public and went on to develop new graphics accelerators and AIBs, the Revolution 3D powered by the T2R (Ticket to Ride), and the Revolution all derivatives of the 128-bit Imagine, each with faster 3D and video scaling features. And then in December 1999, the company announced it had a letter-of-intent from S3 Inc. (later S3 Graphics Co.), one of its major competitors to buy substantially all of Number Nine’s assets and intellectual property. By mid-2000, S3 had completed the acquisition and Number Nine ceased operations — 17 years after it started.

In the end, like most graphics AIB markers, it became impossible to survive being a commodity graphics device within a commodity computer.