The PGC consisted of three interconnected PCBs and contained a graphics processor and memory. Targeted for programs such as CAD and page-layout, the PGC was, at the time of its release the most advanced graphics board for the IBM XT.

The PGC had a simple graphics controller chip and used an external DAC and discrete logic chips for many other functions and look-up tables, as illustrated in Figure 1. 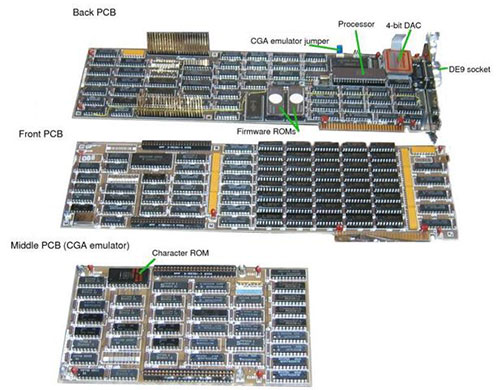 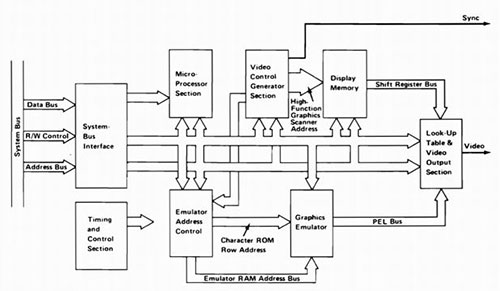 Not widely used in commercial and consumer-class PCs, its price at $4,290 compared favorably to a $50,000 dedicated CAD workstation of the time, even including the cost of a PC XT model 87 ($4,995). Today that AIB would cost $9,910 — makes the AIBs today look cheap by comparison.

In the late 1980s, the original IBM peripheral bus known as ISA (industry standard architecture) had evolved from a slow 4.7 MHz 8-bit bus to an 8 MHz 16-bit and opened up a gateway for clone AIB manufacturers. The clone PCs and accessories were marginalizing IBMs core PC business, and the company wanted to halt that. Diverting from its openness and reasonable licensing policy, in 1987 the company introduced a new PC, the PS/2 with a proprietary OS (OS/2) and a system bus, the Micro Channel; the micros channel was not backward compatible with ISA boards. The 8514/A high-resolution graphics adapter was the first AIB for the 10 MHz Micro Channel.

Introduced with the IBM Personal System/2 computers in April 1987. Rumors of the 8514/A project began circulating as early as 1985. The chip was developed in Hursley UK, not too far from the Texas Instruments Bedford development center that created the popular TSM34010, which I covered in my preceding article. The famous Video Graphics Array (VGA) and 8514/A Chips and add-in boards (AIBs) were all designed at IBM Hursley as were the monitors.

The 8514/A was an optional upgrade to the Micro Channel architecture-based PS/2’s Video Graphics Array (VGA) and introduced within three months of PS/2’s introduction. 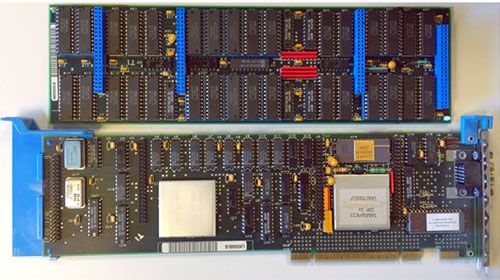 The 8514/A was the first fixed-function graphics accelerator for PCs with the support of 1024×768 resolution and up to 256 colors. The basic 8514/A with 512KB VRAM only supported 16 colors; the 512KB memory expansion brought the total to 1MB VRAM and supported 256 colors.

The 8514/A was the beginning of large-scale integration graphics chips and compared to the graphics controller of the PGC (Figure 1) the 8514-controller chip (Figure 3) was huge.

The 8514/A was capable of four new graphics modes not available in VGA. IBM named them the advanced function modes, and in addition to 640 ×480. The three other modes got up to 1024 x 768 pixels; however, somewhat ironically it did not support the conventional alphanumeric or graphics modes of the other video standards since it executed only in the advanced function modes. In a typical system VGA automatically took over when a standard mode was called for by an application or the OS.

As a result, an interesting feature of the 8514/A was that a system containing it could operate with two monitors. In this case, the usual setup was to connect the 8514 monitor to the 8514/A and a standard monitor to the VGA — Figure 4 shows the connection of a VGA/8514/A system. 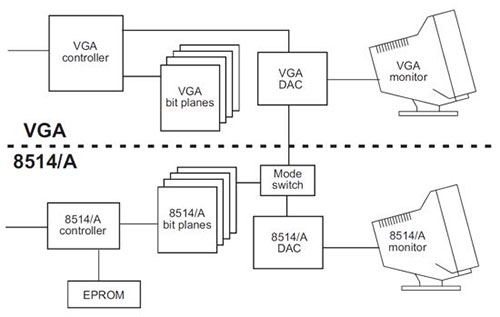 Figure 4. The architecture of a VGA/8514/A system (Source The PC Graphics Handbook)

Although often cited as the first PC mass-market fixed-function accelerator the IBM’s 8514 was not the first PC AIB to support hardware acceleration, that distinction goes to the NEC µ7220.

What made the 8514/A interesting was the accelerator, which was known as the draw(ing) engine. The 8514/A was the first widespread fixed-function accelerator, and therefore relatively inexpensive, and it was a fast accelerator for the time. Other graphics accelerators of the period used the Texas Instruments TMS34010/TMS34020 chips—a RISC processor running at around 50MHz. They were more flexible, but more complex to program, more expensive, and generally about as fast as the simpler 8514/A.

Up until the 8514/A’s introduction, PC graphics acceleration was relegated to expensive workstation-class, graphics coprocessor boards. One could get coprocessor boards using special CPU or digital signal processor chips which were programmable. However, fixed-function accelerators, such as the 8514/A, sacrificed programmability for better cost/performance ratio.

In the late 1980s and early 1990s, several companies reverse-engineered the 8514/A and offered clone chips (i.e., software compatible) with ISA support. Prominent among those was Paradise systems (which was acquired by Western Digital) PWGA-1 (also known as the WD9500), Chips & Technologies 82C480, and ATI’s Mach 8 and later Mach 32 chips. In the early 1990s compatible 8514 boards were also based on TI’sTMS34010 chip. All of the clones were faster, due in part to new higher density VRAM chips, and as a result pushed the display resolution up to 1280 × 1024 with 24-bit, 16 million colors — truly a workstation in a PC.

IBM had one more graphics controller effort, the XGA which would be the superset of the VGA and 8414/A, I’ll cover that in a future edition, the next edition will be on widely popular and industry standard-setting Video Graphics Adaptor — the ubiquitous VGA.