Current and Past Issues of ComputingEdge

See an archive of issues of ComputingEdge below. 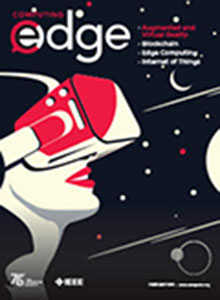 Usability in Augmented and Virtual Reality – In augmented and virtual reality (AR and VR), clunky headsets and unintuitive interfaces that require exaggerated gestures can create negative user experiences. That’s why today’s designers are focusing on comfort and incorporating natural movements. This ComputingEdge issue opens with two articles that discuss usability in AR and VR—one that proposes leveraging the reach of our limbs in AR environments, and another that confronts a common usability challenge.

Do ideas have midlife crises? Do technical concepts ever feel so dissatisfied with themselves that they purchase an expensive sports car and move to a Grecian isle? Silly question, of course. Technical ideas can’t get driver’s licenses, much less move to an island paradise. But researchers can get dissatisfied with their field and conclude that they need to abandon or at least radically modify some existing concepts. Perhaps the most dramatic example we can find in the pages of IEEE Computer Society magazines comes from the 1980s, when our members started to see the limitations in complex instruction machines and embraced the ideas of RISC, or Reduced Instruction Set Computers. (You might want to take a look at Patterson and Séquin’s “A VLSI RISC,” in Computer’s September 1982 issue).

If you want to see some current examples of researchers rethinking mature technologies, you’ll see several examples in the current issue of ComputingEdge. In “Security Midlife Crisis: Building Security in a New World,” Hogler Mack and Tom Schröer write that although “we are used to adapting, evolving, and improving security measures to keep up… some of the recent and upcoming changes are so fundamental that incremental improvements no longer seem appropriate.”

A second article on security—“Network-Level Security for the Internet of Things: Opportunities and Challenges” by Hassan Habibi Gharakheili and his colleagues—gives another perspective on the need to revisit mature ideas. The authors note that traditional security strategies have not been able to deliver the protection that we need. “It is becoming clear,” they explain, “that device-level security will by itself not suffice and network-level protection measures will be needed.”

If you would like to see how researchers discuss ideas and identify the strengths and weaknesses of technical ideas, you should pay attention to virtual roundtables. Many IEEE Computer Society magazines publish them, including Computer and IEEE Software. ComputingEdge republishes as many as it can to help you understand the current debates in computer science. This month, we have one on blockchain with Cesare Pautasso, Olaf Zimmermann, Liming Zhu, Thomas Bocek, and Xabier Larrucea (“Unchain or Block the Hype?: Decision Drivers, Success Factors, and Perspectives for Blockchain Adoption”). It is a fascinating discussion of various applications of blockchain and the properties of newer forms of blockchain. It envisions a global, decentralized blockchain ecology while also warning that “it is too early to standardize.”

Not all mature technologies are ready to settle down. You’ll find out where they are going in ComputingEdge.