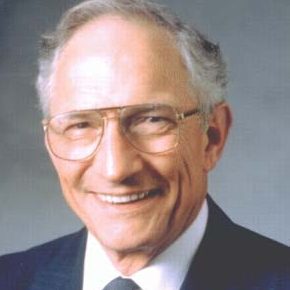 Robert Norton Noyce (12 December 1927 – 3 June, 1990), nicknamed “the Mayor of Silicon Valley,” co-founded Fairchild Semiconductor in 1957 and Intel in 1968. He is also credited (along with Jack Kilby) with the invention of the integrated circuit or microchip. While Kilby’s invention was six months earlier, neither man rejected the title of co-inventor.

He graduated Phi Beta Kappa with a BA in physics and mathematics from Grinnell College in 1949 and a Ph.D. in physics from Massachusetts Institute of Technology in 1953. He studied the first transistors, developed at Bell Laboratories, in a Grinnell College classroom.

After graduating from the Massachusetts Institute of Technology in 1953, he took his first job as a research engineer at the Philco Corporation in Philadelphia, Pennsylvania. He left in 1956 for the Shockley Semiconductor Laboratory in Mountain View, California.

Noyce and Gordon E. Moore (a chemist and physicist) founded Intel in 1968 when they left Fairchild Semiconductor. The relaxed culture that Noyce brought to Intel was a carryover from his style at Fairchild Semiconductor. He treated employees as family rewarding and encouraging team work. His follow-your-bliss management style set the tone for many Valley success stories.

Intel’s headquarters building, the Robert Noyce Building, in Santa Clara, California is named in his honor, as is the Robert N. Noyce ’49 Science Center, which houses the science division of Grinnell College.

In his last interview, Noyce was asked what he would do if he were “emperor” of the United States. He said that he would, among other things, “make sure we are preparing our next generation to flourish in a high-tech age. And that means education of the lowest and the poorest, as well as at the graduate school level.”

In July 1959, he filed for U.S. Patent 2,981,877 “Semiconductor Device and Lead Structure,” a type of integrated circuit. This independent effort was recorded only a few months after the key findings of inventor Jack Kilby. For his co-invention of the integrated circuit and its world-transforming impact, three presidents of the United States honored him.

He would eventually accumulate sixteen patents to his name.

Noyce was inducted into the Junior Achievement U.S. Business Hall of Fame in 1989.

1978 Harry Goode Memorial Award
“In recognition of their original contributions to semiconductor integrated circuit technology, their pioneering achievements in using this technology for the development and production of microprocessors and many other computer system components, and their distinguished leadership of and insight in computer science and technology, which have revolutionized the information processing field.”
Co-recipient with Gordon Moore
Learn more about the Harry Goode Award