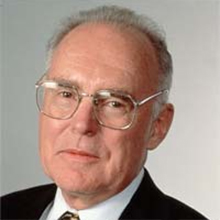 Moore is widely known for “Moore’s Law,” in which in 1965 he predicted that the number of components the industry would be able to place on a computer chip would double every year. In 1975, he updated his prediction to once every two years. It has become the guiding principle for the semiconductor industry to deliver ever-more-powerful chips while decreasing the cost of electronics.

Moore earned a bachelor’s in chemistry from the University of California at Berkeley in 1950 and a Ph.D. in chemistry and physics from the California Institute of Technology in 1954. He was born in San Francisco on Jan. 3, 1929.

He is a director of Gilead Sciences Inc., a member of the National Academy of Engineering, and a Fellow of the Royal Society of Engineers. Moore also serves on the board of trustees of the California Institute of Technology. He received the National Medal of Technology in 1990 and the Medal of Freedom, the nation’s highest civilian honor, from George W. Bush in 2002.

1978 Harry Goode Memorial Award
“In recognition of their original contributions to semiconductor integrated circuit technology, their pioneering achievements in using this technology for the development and production of microprocessors and many other computer system components, and their distinguished leadership of and insight in computer science and technology, which have revolutionized the information processing field.”
Co-recipient with Robert N. Noyce
Learn more about the Harry Goode Award