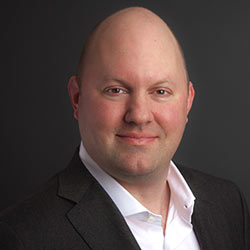 Marc Andreessen is a senior president of technology and co-founder of Netscape Communications Corporation in Mountain View, California.  Marc founded the company in April 1994 with Dr. James Clark, founder of Silicon Graphics, Inc., a Fortune 500 computer systems company.  Netscape Communications’ goal is to provide open software to enable people and companies to exchange information and conduct commerce over the Internet and other global networks.

As an undergraduate at the University of Illinois in Champaign, Illinois, Marc created the NCSA Mosaic research prototype for the Internet with a team of students and staff at the university’s National Center for Supercomputing Applications (NCSA).  Offering a friendly, point-and-click method for navigating the Internet and distributing it free to network users, NCSA Mosaic in just over one year gained an estimated two million user worldwide.  In his role at Netscape Communications, Marc sets and oversees the technical direction of the company as it creates advanced, commercial-caliber software for the Internet.  His technical team includes five of the six other core members of the NCSA Mosaic development team as well as top engineers from leading Silicon Valley companies.  In December 1994, Netscape Communications released its first open software products, Netscape server software including Netscape Commerce Servicer, the first secure server for the Web and Netscape Navigator client software.  Today, Netscape Navigator accounts for more than 75 percent of the browser usage on the Web, according to statistics from popular World Wide Web sites.

Mar was named in 1994 as one of the top 50 people under the age of 40 by Time Magazine, and named “Man of the Year” by MicroTimes Magazine.  He received the 1995 Computerworld Smithsonian Award for Leadership.

Marc earned his Bachelor of Science degree in Computer Science at the University of Illinois in 1993.