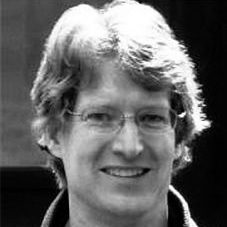 Eric J. Bina is currently a software engineer at Netscape Communications Corporation, in Mountain View, California, where he was one of the founding employees.  Netscape Communication’s goal is to provide open software to enable people and companies to exchange information and conduct commerce over the internet and other global networks.

Before joining Netscape in 1994 he was a member of the technical staff at the National Center for Supercomputing Applications at the University of Illinois, where he worked with Marc Andreessen on developing the original Mosaic, which became the first widely used browser for the World Wide Web.  Mosaic opened the Internet and the nascent WWW to academic, commercial, educational communities, and the general population.  In just over one year, NCSA Mosaic gained an estimated two million users worldwide.  Before NCSA, Eric was employed by Motorola, working on UNIX systems development.

Eric has received both a B.S. and M.S. degree in Computer Science from the University of Illinois in 1986 and 1988, respective.  Together with Marc Andreessen he received the ACM Software Systems Award in 1995 for their contributions to the development of the World Wide Web.