The Industry Advisory Board (IAB) chair is selected by a majority vote of the Industry Advisory Board members to serve for a two-year term. The chair works with the IEEE Computer Society executive director and governance leadership to reach agreements on issues that are relevant and in support of the computer society’s role as a leading provider of computing products and services and technology information to the society’s membership and the global community.

Since the inception of the Industry Advisory Board in 2008, four members have served in the capacity of chair. 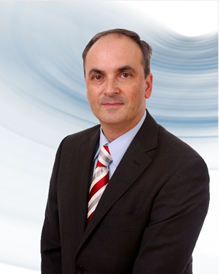 Rufo De Francisco is the Director of Software Engineering and Development at the Global Cyber Alliance (GCA). He is responsible for the software engineering process and leads a software development team that implements and delivers solutions to reduce cyber risk and improve our connected world. Prior to assuming his current role, De Francisco held senior software engineering and quality positions at Intel, where he worked for over 25 years. De Francisco received a master’s degree in Computer Science from the University of Arizona, where he studied under a Fulbright scholarship. He earned a master’s degree in Electronic Physics and a bachelor’s degree in Physics, both from the University of Salamanca, Spain.