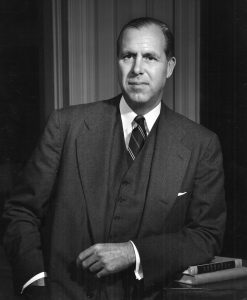 William Wallace McDowell was born in 1906 and graduated from the Massachusetts Institute of Technology in 1930 with an SB in Engineering Management. He started his career with IBM in July that year in New York City, moved to Endicott, New York in 1931 as a designer, and retired in 1968 as IBM resident vice president there, after a thirty-eight year association with the company.

During World War II, Mr. McDowell’s research and engineering group was responsible for 99 diversified and highly important development projects for the U.S. government. He directed the post-war conversion to commercial efforts and the re-engineering of IBM’s entire product line. Mr. McDowell was responsible for the transition from electromechanical techniques to electronics, and the subsequent transition to solid state devices.

He directed the development of the first commercial electronic calculator, which was followed by the IBM Selective Sequence Electronic Calculator operated at the company’s headquarters for solution of scientific problems. He later was responsible for development of major advances including IBM’s card-programmed calculator, magnetic drums and tape units, magnetic core and disc storage, the company’s “700” systems, and the Naval Ordinance Research Calculator.

In addition, to building up the original engineering team in Endicott, New York, he established the San Jose, California laboratory, assisted in the growth of the Poughkeepsie, New York laboratory, and moved IBM into the international scientific world with the establishment of the Zurich, Switzerland laboratory.

In 1962, a grateful company approached the Institute of Radio Engineers, one of the predecessor institutes of the IEEE, with the idea of funding an award in Wally McDowell’s honor. This award was finalized in 1965, after the merger of the IRE and the American Institute of Electrical Engineers, and the emergence of the Computer Group, the forerunner of the Computer Society, to administer the award as its highest technical achievement award.

Among his many functions, Mr. McDowell served as the first Chairman of the Advisory Board of the IBM Journal of Research and Development, as President of the Broome County Chamber of Commerce, as Director for several hospitals and banks, and also on the Hospital Review Board of the State of New York. He was a member of the American Institute of Electrical Engineers, the Industrial Research Institute, and the American Management Association.