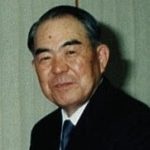 A native of Kyoto, Tsutomu Kanai received both his B.S. and Ph.D. in Mechanical Engineering from Tokyo University. He joined Hitachi in 1958 as a researcher developing nuclear reactors. During his career, he progressed through increasingly important management positions in Hitachi’s Power Group. In June 1991, he was elected president of Hitachi Ltd., the position he held when he retired in March 1999.

Dr. Kanai’s versatile career as a scientist, engineer, designer and manager led him to advocate distributed computing and the new generation of computers.