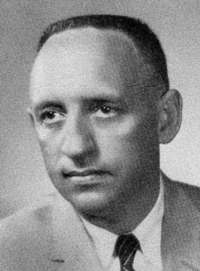 Harry H. Goode, born in New York City on 30 June 1909, was a pioneer and leader in the field of system engineering. One of the first scientists to fully comprehend the powers and abilities of computers, he formulated many principles of system engineering and developed techniques for the design, analysis and evaluation of large-scale systems. He was instrumental in initiating early systems projects including the Typhoon computer and Whirlwind computer at MIT. Among other activities, he participated in the study which led to Bomarc missile and he conceived and developed their Air Defense Integrated System Project.

In addition to his scientific contributions, Mr. Goode advanced the information processing sciences through his teaching at the University of Michigan and his man publications on statistics, simulation and modeling, vehicular traffic control, and system design. One of his most important achievements was co-authoring the first book on “System Engineering” which classified and regularized systems and their design processes.

Mr. Goode, statistician, mathematician, electrical and chemical engineer, and professor, was member of the IRE, now the IEEE Computer Society, the computer advisory committee of the society of Automotive Engineers. As chairman of the National Joint Computer Committee, he led this group in creating an expanded and strengthened organization, AFIPS, to help meet the need arising from the rapidly growing information processing technology. MR. Goode died in an automobile accident before AFIPS was formally chartered.