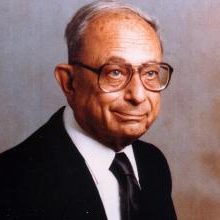 Sidney Fernbach was born and raised in Philadelphia, and  attended Temple University where he received both a B.S. and an M.A in physics. He received the Ph.D. in Theoretical Physics from the University of California, Berkeley in 1952. After receiving his Ph.D., he began his long and productive career as a physicist at the Lawrence Livermore National Laboratory (LLNL) where he became head of the Computation Division in 1955. Between 1958 and 1968, Dr. Fernbach was also head of the Theoretical Division at Livermore. From 1975, until his retirement in 1979, he was Deputy Associate Director for Scientific Support at the Laboratory. He then became an independent consultant and maintained a long term consultant relationship with Control Data Corporation.

He is internationally recognized as one of the most influential scientists affecting the design of high performance computers during the period that the modern electronic computer grew from embryo to adolescence. From the first supercomputer systems, such as the Univac I and the IBM 704, to supercomputers a million times faster, Dr. Fernbach played a pivotal role.

Early on, he recognized that the Livermore Lab required ever increasingly high computational power for its research and development programs. Dr. Fernbach developed important relationships with the primary computer vendors, but especially with Seymour Cray during Cray’s early days at Control Data Corporation which continued to Cray Research. Dr. Fernbach’s deep understanding of the needs of the developing field of computational science, and his ability to abstract and generalize its needs, influences the designs of the machines conceived in and built by one of the world’s most innovative industries.

Dr. Fernbach was involved in a broad array of committees for the Departments of Energy, commerce, and Defense. He was constantly tapped for ad hoc committees established to advise government entities and universities on mathematics, computer science and computational science research and was in demand as a member of the Board of Directors of numerous high performance computer star-ups. For a number of years he was a member of the Computer Science and Engineering Board of the National Academy of Sciences and the NSF Computer Activities Advisory Board. And in 1974, he organized and established the very successful National Magnetic Fusion Energy Computer Center now called the National Energy Research Supercomputer Center (NERSC).

He was a member of a number of professional societies and driven by his broad interests gave time and energy to many of them unstintingly. His membership included the IEEE, the Computer Society, the ACM, the Society for Industrial and Applied Mathematics, and Sigma Xi. He was a Fellow of the American Physical Society and of the American Association for the Advancement of Science. Although he eschewed them, he received many honors including the Computer Society Merwin and McDowell Awards, the latter “for continuously challenging, inspiring, and supporting American designers and industry to produce many successive generation of supercomputers.”

Dr. Fernbach founded and chaired the IEEE Subcommittee on Scientific Supercomputing. In that role, he used his experience and understanding of the problems involved in high performance computing to help mold U.S. Government policy to take cognizance of the importance of supercomputing to the economic and national security health of the country. Dr. Fernbach also founded the annual IEEE Computer Society Compcon meeting and served for many years as an organizer and catalyst for that meeting.

He edited a number of books and journals relating to computing and physics. He was the originating editor of the book series Methods in Computational Physics and also of The Journal of Computational Physics. From their founding in 1985, he was subject area editor for applications for The Journal of Supercomputing and a member of the advisory board of The International Journal of Supercomputer Applications.