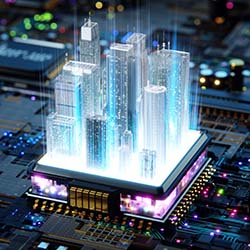 NB-IoT (Narrowband IoT) chipset can be defined as a small electronic device entrenched in the respective machinery and electronic maneuvers. The smart features associated with the dapper technology such as relatively low power consumption, high system efficiency, and improved spectrum proficiency has made it a preferred choice in several industry verticals.

In a nutshell, NB-IoT perks up the power consumption of the user expedients, system size, and volume efficiency, particularly in the deep coverage areas. Battery life of more than ten years can be buoyed up for an array of use cases. First-hand physical layer signs and indications are also fabricated to cater to the ever-growing requirement of protracted coverage. The primary cost of the NB-IoT modules, however, is projected to be nearly comparable to GPRS. And, the core technology is also way too simpler than that of today’s GSM. Moreover, its cost is also anticipated to fall off rapidly as the demand soars high. Most importantly, propped up by all the major mobile tools, modules, and chipset manufacturers, NB-IoT can efficiently coincide with 2G, 3G, and 4G mobile grids & setups.

Several telecommunication establishments across the world have started supporting the technology with full sway, and this has helped in the overall development of NB-IoT networks to a significant extent. These smart grids tend to accelerate the demand for chipsets quite substantially, thereby augmenting the growth of the industry. Additionally, chipset manufacturers are initiating new-fangled products in the sector that are overtly capable of getting incorporated in the IoT expedients. When it comes to NB-IoT applications, typically an insignificant amount of data volume requires to be conveyed intermittently. NB-IoT has now come out as a standard solution for this type of wireless infrastructure. Even mobile operators across the globe are now deploying this avant-garde technology to provide better coverage for their customers.

Skylo, one of the most prominent (NB-IoT) solutions of today has recently come up with ‘Fish Catch Report’ for the fishermen clique to aid in the selling method even before they put in their vessels on the shore. As per Skylo, the Fish Catch Report is an advanced mobile communications system and clouts up the Skylo setup, accessible through the alliance with Britain’s Inmarsat and BSNL to facilitate the boat owners and the fishermen with real-time data, two-way communications, and the power to send SOS posts. Fishermen can now dynamically hawk their catches based on the respective demand even when they are out at deep sea. This way, they can now easily augment their ability to ramp up their profits by peddling at a higher price and curtailing the overall waste, thus making the most out of their work.

According to Allied Market Research, the global narrowband IoT (NB-IoT) chipset market is anticipated to showcase a considerable CAGR from 2021 to 2030. In the last few years, there has been a significant increase in the trend of incorporating IoT maneuvers, which has been highly beneficial for market growth. At the same time, a steep rise in the use of the Internet has supplemented the growth yet more. Moreover, the exclusive potential of cellular IoT systems to cover the entire population at large boosts the growth of the market in more than one way. Most importantly, the fact that it comes up with much-improved data rates in comparison with unlicensed band-based networks, for example, Sigfox and LoRaWAN, and offers pretty superior penetration in structures has accelerated its demand all the more. Last but not the least; the emergence of smart cities to expedite viable development is projected to pave the way for an array of lucrative prospects in the industry, which in turn has helped the sector expand even more.

Here, it’s worth mentioning that the outbreak of the pandemic led to extended lockdowns in the majority of countries across the world, which accordingly, gave way to disrupted supply chains. Moreover, most of the countries pulled up the activities in terms of international trade to detain the spread of the virus. As a result, a steady decline was also observed in the seamless supply of connectivity implements. These factors impacted the narrowband IoT chipset market negatively, especially during the initial phase. However, the global situation is getting better on a gradual note, and the market is expected to get back on track soon.

Koyel Ghosh is a blogger with a strong passion and enjoys writing on miscellaneous domains, as she believes it lets her explore a wide variety of niches. She has an innate interest in creativity and enjoys experimenting with different writing styles. A writer who never stops imagining, she has been serving the corporate industry for the last four years. koyel.ghosh@alliedmarketresearch.net. LinkedIn https://www.linkedin.com/in/koyel-ghosh/