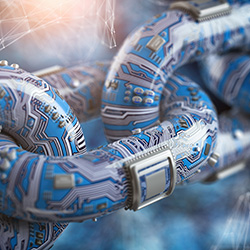 With worldwide optimistic sentiment surrounding blockchain, many companies ponder if it is a practical, necessary competitive tool within their specific industry and business. As an immutable, transparent ledger system, blockchain sparks excitement in versatile applications outside cryptocurrency — for example, voting records, property transactions, intellectual property, luxury goods, smart contracts, government identification, and more. Early enthusiasts believe blockchain has the potential to revolutionize multiple industries such as commerce, politics, government, healthcare, manufacturing, food, retail, and more, and it is estimated blockchain could increase global GDP by $1.76 trillion by 2030.

With the rapid growth of 85.9% expected, a future world built on blockchain offers promises of transparency, autonomy, security, and automation, but experts caution against potential unverified hype. While a Deloitte study claims 96% of financial service experts believe blockchain has achieved mainstream adoption, it has a long way to validate its reality and comes with concerns of negative effects on the environment, security concerns, and heavy power consumption. Blockchain skeptics point to unlikely long-term consumer adoption and companies illogically rushing to solve all problems with blockchain. For blockchain to truly succeed, widespread adoption is not only necessary but critical, especially in industries like finance, where interconnectedness is key. Despite these inherent challenges, companies are primed for the blockchain revolution and rapidly developing their own innovations.

Read “To Blockchain or Not to Blockchain: That Is the Question” in IEEE IT Professional to learn more about the real-life application of blockchain in the insurance sector. Blockchain could potentially improve efficiency, security, transparency, and optimize manual processes for insurance companies. Is it the modernization answer to an outdated industry, creating positive customer experiences and lowering operating costs, or is it a risky, long-term investment destined to fall short of expectations?