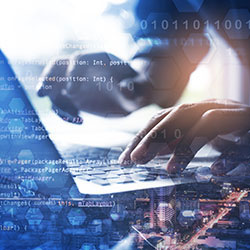 Ever since the internet took off in the late 1990s and found its way into almost every home and business on Earth, the world of software development has revolved around it. It has moved what used to be desktop-only applications into the cloud. It has enabled developers to push security and feature updates to devices, lengthening the software lifecycle. It even managed to end Microsoft’s dominance over much of the technology world.

Now, as the 2020s begin, the software development landscape is undergoing even more changes. Shaped by further developments in internet technology, and fueled by an ongoing revolution in mobile computing, there’s little doubt that software development and everything connected to it will emerge from the 2020s looking utterly different than past iterations.

To get an idea of what that future’s going to look like, here are the top 4 trends that will change software development in 2020 and beyond.

The Rise of the AI Coder

Over the past few years, artificial intelligence (AI) has been developing at a pace that few expected. The technology’s come so far that it’s now embedded in products of all kinds, from smart home devices to streaming media services, and just about everything in-between. It’s not going to stop there, though.

In the 2020s, there’s a good chance that much of the work of today’s software developers will be handled by next-generation AI platforms. In fact, the transition’s already starting. AI systems like Bayou are already helping developers by providing an autocomplete function to aid in coding using a sophisticated deep learning approach. And platforms like Deep Code use AI to scan and proactively fix errors and security vulnerabilities in new software commits.

With those advances in mind, it’s all but inevitable that AI will soon make the leap into autonomously developing code from scratch, triggering a new era in software development.

For much of the last decade, 4G wireless systems were the state of the art in mobile data and communications. While it was a big leap forward from older types of wireless networks, it did have some limitations. One of them is the fact that it doesn’t handle high connection density very well, topping out at a few thousand devices per square mile (under real-world conditions). That means the technology’s struggled to accommodate the massive increase in smartphones, tablets, and connected devices that have become the norm today.

In the 2020s, 4G wireless systems are due to be replaced by 5G networks, which can support millions of devices per square mile, with connection speeds up to ten times faster than 4G. That capability is going to throw open the doors for mobile developers to make more multimedia-rich experiences on a multitude of connected devices. It’s going to take things like augmented reality (AR) and virtual reality (VR) off of the drawing boards and into the real world in a big way. It’s also likely to fuel development in a variety of autonomous transportation systems, providing yet another field for software developers to focus on.

One major consequence of the rise of the internet is that the world now generates an almost absurd amount of data at all times. Experts believe that by 2025, the figure will reach approximately 463 billion GB of new data created each and every day. That data has already come to fuel an analytics revolution that has already reshaped a variety of industries.

As the 2020s begin, data analytics is now at the core of products ranging from recruitment software and the latest digital marketing tools to airline route planners and hospital management platforms. In short – it’s everywhere. As the decade wears on, that trend is going to accelerate as more and more devices increase the velocity and variety of the data available. For software developers, that means every project will soon involve data analytics if they don’t already.

The Line Between Mobile and Desktop Gone Forever

As mobile devices started to take over the technology world, many developers started to shift their focus to the development of mobile apps. In the process, a whole new software ecosystem evolved that bore little resemblance to that of the traditional desktop computing market. As the 2010s drew to a close, though, a new trend took hold that promises to reunify the desktop and mobile computing worlds once and for all: the development of progressive web apps (PWA).

A PWA is like a hybrid of a webpage and a mobile app, but that’s platform agnostic and provides the same software experience on any device. They’re expected to come to replace most desktop software and mobile apps, bringing the same native functionalities to every form factor. According to OutreachPete, they will also revolutionize SEO and web search, because unlike traditional applications their contents can be indexed directly. As a sign of what’s to come, Microsoft has already turned a version of its venerable Outlook email software into a PWA – and it’s already available to the public.

Going forward, these four major trends are set to upend the status quo in the software development space. They’ll change much about how developers work, from their priorities to the platforms they work on. In the end, we’ll be left with a software landscape that’s heavy on multimedia and data, with programs that run on-demand on all platforms, regardless of the manufacturer. And it should be a future that’s more secure and bug-free, thanks to the contributions coming from AI-powered development tools. Altogether, there’s plenty of good things ahead in the world of software development – and the promise of a fantastic decade to come.