Tech Opened the Door to the Gig Economy, But Is It Here to Stay?
by Larry Alton
Visit our Jobs Board 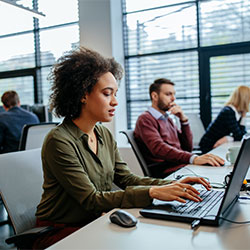 Technology brought us into the gig economy, which is now flourishing. In case you aren’t familiar, the “gig economy” refers to economic conditions where companies tend to hire people for “gigs,” or short-term, flexible work, and people are more interested in taking on many different contracts, clients, and opportunities, rather than working for a single organization.

Tech continues to develop, with advances in the apps and gadgets we’ve known for years, as well as the introduction of new innovations. But will these continued evolutions keep advancing the gig economy, or has this been a temporary pit stop on the road of economic development?

How the Gig Economy Started

Let’s start by examining some of the root causes of the gig economy, as well as the platforms that keep sustaining it. Independent contract work became more common as soon as the internet became accepted as a means of mass communication. With even basic technologies like email and instant messaging, people could feasibly do work remotely, and from anywhere in the world—which meant companies could hire people for short-term contracts without having to bring them into the fold of the physical office.

Next came the emergence of platforms designed specifically to connect people with others who might require their products or services. Commerce platforms like eBay stand out here, but the big push came from platforms designed to help skilled or passionate people find gigs; for example, through AirGigs, vocalists and musicians can find opportunities to record vocals for paying clients. Ridesharing apps like Uber allow amateur drivers to set their own hours and pick up fares as they see fit. And plenty of other platforms like Fiverr establish a miscellaneous freelance marketplace, where people can provide almost any service for a fixed fee.

It wasn’t long before companies realized they could save time and money while simultaneously increasing their range of options by relying on contract workers and freelancers more than full-time hires.

Advantages of the Gig Economy

There are some advantages that will keep the gig economy sustainable for many years to come:

Disadvantages of the Gig Economy

However, there are also some factors pushing lawmakers, engineers, and freelancers to try and dismantle this system:

The gig economy has a ton of momentum, and it’s likely to continue influencing employees and employers alike for many years, if not decades, to come. However, there are some major weaknesses and points of criticism that need to be resolved if tech developers are going to keep pushing for new tools in the gig economy, and if lawmakers are going to continue allowing it to exist. While the initial explosion of popularity of the gig economy may fade away, the increased accessibility of gigs and freelancers will likely stick around indefinitely.