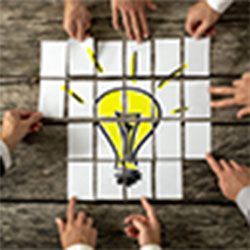 How Microsoft Managed to Win Its Fight to Stay Alive

If you would have asked a techie back in the late 2000s or early 2010s what they thought of Microsoft, they might have described it as an obsolete company—one whose technological innovation had slowed to a crawl years ago. Yet back in May of this year, Microsoft’s company value surpassed that of Google—and it might be on track to keep growing.

So how is it that Microsoft has managed to stay alive during its most difficult era, and does it have the potential to keep innovating and growing from here?

You might consider Microsoft’s rock-bottom point to be back in 2012, when it reported its first-ever quarterly loss. There were a few factors responsible for Microsoft’s decline:

So when did things turn around?

A New CEO (and a New Culture)

Things started looking up when CEO Satya Nadella took over the company, recognizing that the business would need to transform radically if it was going to survive. He started by rebuilding the company’s culture from within. Rather than focusing only on Windows and Windows-related products, he encouraged employees to think outside the box, and focus on innovative developments that would sell more Windows licenses. That freedom to experiment led to some fresh innovations—and a new way to approach Microsoft businesses.

Microsoft also improved its focus on traditional products, like Microsoft Office, which have become familiar staples for the majority of audiences. Despite being more than 20 years old, products like Word and Excel are still the standard for many office-related functions, and people are eager to know what’s coming in the latest version.

Moreover, these software products are more loaded with features than ever before, and are built to appeal to a modern business crowd. They’ve also been released on competitors’ operating systems. Accordingly, they’re as profitable as they’ve ever been, and continue to be used by the majority of professionals.

When you search for something, you probably turn to Google—but Google no longer has the entire market dominated. If you include Yahoo! and AOL search, both of which run on Bing, Bing controls more than a third of the search share on the internet. Search engine advertisements represent a massive share of marketing and advertising revenue, so Microsoft certainly isn’t hurting by being a solid second-best in the field.

Microsoft’s original vision was to get a computer in every home, and for a while, that strategy led them to an astounding streak of success. However, in the modern era, there are already multiple devices in every home, so the traditional model can no longer work. Today, Microsoft is focusing more on mobile and cloud-related performance, focusing on making devices perform better, rather than blindly investing in selling more devices.

So will Microsoft continue to be relevant for the foreseeable future? Can its products continue to compete with the likes of younger, more energetic companies? As long as CEO Nadella’s vision for a singular, open company continues, it’s likely that Microsoft will continue to grow.

Successful tech companies aren’t the ones with the greatest name power or the longest history; they’re the ones that are able to adapt to changing times, and Microsoft has proven its adaptability, even after all these years.