Excessive Screen Time: Not a Problem Specific to Kids
By Anna Johansson 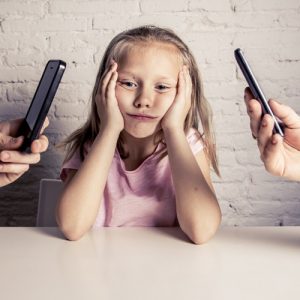 Everywhere you look there are kids—from toddlers to teenagers—with noses buried in screens. Whether it’s a computer, tablet, smartphone, or TV, our youth are spending way too much time sitting in front of screens. But this isn’t a problem reserved for kids.

Whether it’s a tablet, smartphone, or video game console, even today’s youngest children find themselves constantly connected—glued to screens and addicted to the release they provide.

According to a research study that examined nearly 900 children between the ages of six months and two years, children who use handheld screens before they begin to talk may be at a higher risk for speech delays.

“By their 18-month check-ups, 20 percent of the children had daily average handheld device use of 28 minutes, as reported by their parents,” ASHA explains. “Using a screening tool for language delay, researchers found that the more handheld screen time a child’s parent reported, the more likely the child was to have expressive speech delays.”

For every 30-minute increase in handheld screen time, research shows that children face a 49 percent increased risk of expressive speech delay. But this is far from the only impact. According to other independent studies, excessive exposure to technology also presents an increased risk of the following:

But while we’d like to believe that excessive screen time is only a problem for our children, the reality is that it affects us all. American adults are spending more than 11 hours per day behind screens—watching videos, playing games, using social media, etc.—and the ill-effects are just as detrimental to our health and vitality.

Excessive Screen Time in the Workforce

While some screen time is certainly necessary for adults to fulfill their professional obligations, it all depends on the kind of screen time people are using. Too much screen time away from work – such as using social media, playing video games, and binge-watching Netflix shows – can negatively impact members of the workforce when it comes time to use technology for productivity.

All you have to do is look at a list of the top productivity-killers at work, and you’ll see that technology is largely to blame. Social networking, email, calls and text messages, and wasting time on the internet are all top factors. Then there are the physical health issues, such as headaches and vision problems.

No matter how you slice it, excessive screen time is a problem for the entire family. So here are some ways to combat it:

1. Unplug and Connect With Family

“Find at least one or two opportunities during the day—at the dinner table, for example—for everyone to disconnect,” Loyola University Medical Center suggests. “Mealtime is a prime opportunity for conversation. Make a commitment and have everyone check their devices at the kitchen door.”

This is an area where you should lead by example. You can’t continue to use your devices and expect your kids to take you seriously. This has to be a group effort.

Nobody is saying all screen time is bad, but when you do have extended screen time, make it a family affair. By watching a movie together or having multiple people participate in an online game (in the same room), you maintain the social and personal interactions that so often get lost.

Technology is often reverted to as a solution for boredom. If you and your family are constantly shoving your noses into screens, it’s an indication that you don’t have much going on. Try finding other activities and hobbies that interest your family. This will reduce the amount of time you have to waste on technology.

Adding it All up

Whether you’re an eight-year-old with an iPad or a 48-year-old with a smartphone, excessive screen time has a negative impact on everyone. If you want to instigate positive change in your family, start by addressing this rarely touched issue. Your family will be better for it.