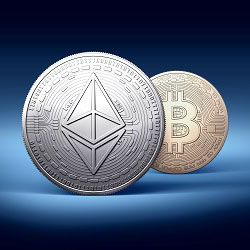 Within technology circles, it’s not uncommon to encounter fierce debate about a variety of topics. In recent years, none have been more contentious than the battles over which cryptocurrency and blockchain pair will eventually come to dominate the rest. Since the beginning of the crypto wave, the clear consensus choice has been Bitcoin, which has sat atop the market capitalization charts from the earliest days.

Most experts don’t expect that to last, however. As the grandfather of all cryptocurrencies, the Bitcoin blockchain is beginning to show its age. It suffers from a variety of real-world limitations, not least of which is its inability to scale. Seeking to replace it in the race for dominance, a variety of alternative blockchain implementations have risen up to solve some of the inherent problems associated with Bitcoin’s blockchain, but so far none have managed to capture any significant slice of the market.

The one notable exception is Ethereum, which has long been the lone, large-scale competitor to Bitcoin. For its part, though more advanced than Bitcoin, Ethereum also suffers from some issues that it would need to overcome to achieve market dominance. That’s exactly what the developers behind Ethereum hope to accomplish with their upcoming upgrade of the underlying blockchain, which they’re calling Ethereum 2.0. Here’s an overview of some changes that will come with the upgrade.

One of the reasons that early blockchain implementations (Bitcoin and Ethereum included) suffered from performance issues was the fact that they rely on a processing-power-intensive process known as proof of work to validate and record transactions. In such a system, participating computer nodes compete to generate cryptographic hashes that satisfy a network-determined level of complexity. To maintain security, that complexity level is kept high enough that it would deter anyone from attacking the network because it would be too costly to operate the required hardware.

The problem with proof of work is that it’s terribly inefficient, and that’s by design. To begin solving that problem, Ethereum 2.0 is going to transition its blockchain to a more efficient, proof-of-stake system. In such a system, the node that records each transaction is chosen by an algorithm, with chances of selection increasing with the amount of the currency the node’s owner holds. That makes it possible to dramatically decrease the complexity of the cryptographic work, leading to massive throughput gains for the whole network. As each node must stake its own currency to participate, it would remain prohibitively expensive for anyone to attack the network.

In another bid to improve Ethereum’s efficiency and ability to scale, the coming changes will also introduce a processing technique known as sharding. In the current blockchain version, all data that is added to the chain has to undergo verification by all participating nodes. That means that the processing speed of the entire system is limited by the speed of its slowest participant. It creates a bottleneck that increases transaction costs and decreases throughput.

By adding sharding to the mix, Ethereum 2.0 can increase the efficiency of its resource usage in a big way. The new system will accomplish this by breaking data verification tasks up among sets of nodes and each will be responsible for verifying just the data it’s received. That allows the whole blockchain to make use of parallel processing, which could increase overall capacity several times over. Between this added technique and the switch to proof-of-stake, the new Ethereum blockchain should be far faster and more efficient than its predecessor.

One of the features that have made Ethereum such a viable platform and a worthy challenger to Bitcoin’s dominance is its implementation of what’s known as the Ethereum Virtual Machine (EVM). The EVM is an execution environment that runs on all network nodes that facilitates the use of smart contracts. It’s those smart contracts that make Ethereum’s blockchain a global computational device, rather than a mere financial system. Smart contracts on the EVM can run games, execute complex financial transactions, or even operate social networks.

Although EVM is widely used, it remains something of an enigma – even for people with a high degree of programming skill. To address this, Ethereum 2.0 will begin the use of web assembly language, in a system they’re calling eWASM. That would make it possible to execute Ethereum app code right in today’s web browsers, which is a massive improvement over the EVM. Also, it will allow programmers to choose from several languages like Rust, C, and C++ to write code to run on the blockchain. In one fell swoop, eWASM will increase the number of potential programmers for the ecosystem, because it will open the doors to users with no need to learn a native Ethereum-only language.

A New Day Dawns for Ethereum

As of the time of this writing, Ethereum’s developers expect their new changes to begin to go live in the first quarter of 2020. The process won’t be quick, however. The upgrades will be put in place in three separate stages, to take place over a period of at least three years. The technical details of the stages are complex, but the basics are as follows:

As each stage happens, the developers intend to perform thorough tests to make sure that the system is both secure and stable. This will also allow users time to adjust to the specifics of the new blockchain implementation.

Assuming the stages go over without any issues the new Ethereum 2.0 should emerge from the process in a great position to finally end Bitcoin’s long reign as the cryptocurrency king. It will be a trusted system with far fewer scalability issues and a much larger feature set than its primary competitors. Only time will tell if the launch of the upgrade will be the signal of a new blockchain era, but the one certainty is that a new day is dawning for Ethereum – and for the cryptocurrency space as a whole.