Direction of Automotive Software: 2021 and Beyond - Part 2
By Charles Macfarlane, Chief Business Officer, Codeplay Software
Visit our Jobs Board 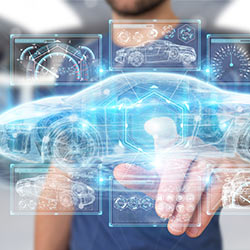 Just like the PC, gaming and smartphone industry, the business models and relationships in automotive will evolve in almost every part of the supply chain and vehicle usage. Shared ownership and “robotaxis” are being extensively projected as the norm within the future’s smart cities bringing a host of benefits.

In 2012, it was quoted that a high-end car today has 100 million lines of code forecast to increase to 1 billion lines of code by the time an autonomous drive vehicle is available[i]. The cost of software development is already between 60% and 70% of the overall development cost of a car, so today’s business model is not going to last much longer.

How are business models changing because of software?

Traditionally OEMs and Tier 1s wanted full control of the software. This is expensive, restrictive and slows down development. Like every other industry, the ecosystem of developers will drive down costs and time to market (TTM), but the people that pay for the software will certainly change, as already shown in other technologies. Google makes money from advertisers and use of our data, which it converts into revenue from advertisers and other enablers.

With cars there is a massive amount of data generated, from road, car, and driver conditions alongside route, speed, congestion etc. An autonomous car is estimated to create up to 5 terabytes of data per hour[ii] to be saves or offloaded for further processing, which accumulated during a day or week provides any car company or data aggregator with highly valuable data. Of course, this data will be processed on the car so that only relevant and interesting data will be extracted. Data is highly valuable, and companies will be willing to provide you the latest advanced software for free, or at a low price, in return for extensive usage of your data. Compare this with an Android smartphone and the amount of free software available.

Assuming the car companies manage to generate a revenue to fund the software development, this does not explain how car companies will create the extensive software required by themselves, as outlined in Part 1 of this blog series.

Just like PCs, games consoles and smartphones, the 3rd party software contribution into cars will be essential. A car company or the existing suppliers are already creaking under the strain of bringing the software together for the complete system. Then supplement this with the continuous development for maintenance, updates, and next generation systems of different semiconductor suppliers. 3rd party developers are a must, providing the latest algorithms and implementations derived from AI and machine learning research.

3rd party software developers require well defined programming languages to efficiently develop complex software. For automotive this can be leveraged from already existing standards defined by ISO C++ and Khronos, specifically OpenCL and SYCL. These programming standards provide developers with robust and industry defined languages. This is only part of the solution however since there are many libraries, tools and guides that make up an ecosystem. Together they make up a software system that can provide developers with a reliable, robust, and familiar platform to solve many of today’s barriers and enable continuous development.

The need to adapt these standards for functional safety is still required. There is substantial freedom within these languages, with 3rd party libraries and open source projects that are not ready to be deployed to cars. This is where coding guidelines are being updated to cope with modern C++ programming, led by MISRA (Motor Industry Software Reliability Association) and ISO26262 standards so that this software can be made ready to be deployed to cars.

Open source means anybody can create and contribute to software applications and libraries, but it also means that the quality can vary drastically. Open standards bring well defined interfaces and functionality but do not mandate how the source code is written. Companies like Codeplay provide closed source implementations of open standards software, providing performance and reliability from properly developed solutions.

Open source is up for debate in the automotive industry. Some say it must be avoided while others embrace it. Both are relevant responses depending on where the open source code resides. If it is for a core compute function in the car used to control the car then there will be substantial restrictions. However, there are many data processing tasks for the car that benefit from open source data that can be extensively used to process the huge amounts of raw data generated by frameworks such as the TensorFlow and PyTorch AI frameworks.

However, there are many great open source libraries and applications that will be used for prototyping and research, and will get developers well on their road to bringing the desired functionality to their system, providing a massive kick-start to a program. Thereafter doing all the necessary productization, and functional safety processes to bring the code into a production-ready state. So overall, open source has an important place in achieving the next generation of ADAS and AV.

While the idea of a car with 1 billion lines of code seems daunting today, other markets have proved it’s possible to embrace the high value of software and still make money from it. It is not the conventional car model and will be led by car companies that adapt to this dynamic fresh approach to the business.

The use of SYCL and OpenCL open standard programming languages, taking advantage of the ecosystem of code, libraries and developers, are vital to support the needs of the next generation AI and machine learning solutions.