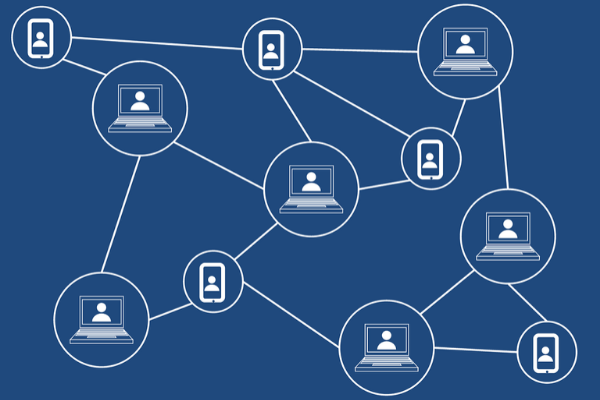 Blockchain technology is increasingly becoming popular, and many industries have been impacted by its use. This technology has already revolutionized industries, including healthcare, finance, real estate, and education.

No wonder, its global market is estimated to reach $20 billion by 2024.

Now, it looks like the blockchain is making inroads into the mobile app development segment. Thanks to its decentralized architecture, mobile apps, and software developers are taking advantage of it to correct several shortcomings.

Blockchain supports digital currency, such as Litecoin, Ethereum, and Bitcoin, enabling a secure and transparent payment process, thus reducing the necessity of a middleman.

It also allows you to keep a transparent and immutable record of transactional digital information and ensures that there is no tampering of data.

One of the main concerns among both mobile app developers and users is security.

With data breaches happening worldwide on a massive scale, people tend to stay away from apps as they fear an invasion of privacy.

When apps are developed with Blockchain, it can increase data privacy, thus making the apps more secure. Its encryption technique is considered impassable since all the data is encoded and saved with a cryptographic hash.

And because of its decentralized architecture, the risk of third-party apps causing chaos is less.

Also, with blockchain, there is a timestamp attached to every transaction. It makes data manipulation and redefining operations almost impossible.

It is a great boon for mobile application developers and end-users.

The decentralized system records all the transactions in the public ledger, allowing anyone to track them as and when they want to. It brings transparency and reduces the risk of any fraudulent transaction or made-up information.

The entire system is thus tamper-proof. Also, as the solution is scalable, if you are developing mobile apps using blockchain, you can quickly scale in numbers of end-users.

Moreover, Blockchain guarantees the safety of mobile apps even when you are upgrading the features.

Blockchain is capable of increasing the reliability of a mobile application as it has a robust and reliable infrastructure.

Blockchain nodes are dispersed worldwide, and they are in-sync with each other. Thus, it makes sure that the same copy of the data is imitated across numerous devices present in different settings.

Due to its decentralized system, there is less chance of the system crashing or collapsing. What’s more? Since the data in each block gets processed in several locations, it is more reliable.

Blockchain is easy to implement

You can’t deny the fact that developing a new blockchain is a difficult task, but implementing it is quite easy.

When you deal with complex technology, it demands more time and effort to implement and integrate, thus increasing the app development cost and maintenance as well.

However, blockchain takes away the problem as developing mobile-based blockchain applications is simple. It saves time and ensures cost-efficiency for mobile app developers, whilst enabling you to offer a feature-rich mobile app to your customers.

Blockchain tools and processes are easily accessible to developers. Moreover, this technology is open-sourced, and thus you can suggest changes that can result in improved blockchain implementation.

It is even capable of storing data permanently, which can’t be modified and can be retrieved anytime, anywhere. Thus, mobile apps developed with blockchain can significantly benefit financial institutions and shipping and logistics companies.

And even when a user has a credit card, there is the fear of getting compromised when personal information is shared, not to mention the gateway fees, app store fees, card processing fees, and bank transfer fees.

With the current process, the developers receive only a small fraction of the amount paid for the app.

However, when you use the decentralized blockchain model, you can use app coins to pay the app store. And the developer can take more than 80% share.

Blockchain will also make in-app purchases much easier for users as app coins can be used as a payment method instead of credit cards. Moreover, users can earn app coins via a reward system since developers reward users for making a purchase and for continued use as well.

Blockchain will develop the advertising model

In the present scenario, developers invest in cost-per-installment ad campaigns so that they can reach more audiences. But there are a lot of middlemen, who take part of the proceeds from sales. It reduces the amount gained by the developer.

Blockchain technology is constantly evolving and will address mobile app related issues so that you can offer improved customer services.

It is expected that this technology can substitute Apple’s App Store and Google’s Play Store and will be mainly used for downloading, buying, and searching.

Considering all the benefits, you should incorporate app development with blockchain so that you can provide enhanced customer service.

Businesses require digital transparency, customers’ trust, and liability, which blockchain can provide. It will help you stay ahead of your competitors.

Everyone, from independent developers to top mobile app development companies realize the promise that blockchain holds as a decentralized database. As mobile transactions gain more momentum in the coming years, blockchain-based apps will continue to grow in popularity.

Lucy Manole is a creative content writer and strategist at Right Mix Marketing, an SEO-focused link building agency. She specializes in writing about digital marketing, technology, entrepreneurship, and education. When she is not writing or editing, she spends time reading books, cooking and traveling. You can connect with her on LinkedIn and Twitter at @RightMixMktg.