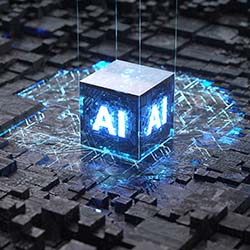 AI chips are a thousand times faster and more efficient than general-purpose CPUs for the training & inference of AI algorithms. However, AI chips are similar to general-purpose CPUs in terms of gaining speed and efficiency by integrating numerous tiny transistors. Smaller transistors are preferable because they run faster and consume less energy than larger transistors. The more the number of transistors in an AI chip, the more is their ability to deliver computational power. On the other hand, AI chips, unlike CPUs, including AI optimized design features that speed up the calculations needed by AI algorithms.

Recently, Wafer Scale Engine 2 (WSE-2) chip has been referred to as the largest AI processor as it involves 2.6 trillion transistors, 40 GB memory, and 8,50,000 cores. WSE-2 with such specifications stands over GPU or system-on-chip competitors with 1000 times more memory and 123 times more cores.

According to a report published by Allied Market Research, the global artificial intelligence chip market size is anticipated to reach $8.02 billion with a considerable CAGR from 2021 to 2030. The Asia-Pacific region is expected to grow at the highest rate during the forecasted period. A company named Nvidia is currently holding the crown in the global AI chip market. The race to make faster and more efficient AI chips has made key market players innovate and launch new products.

For instance, Ambarella expanded its AI vision system-on-chip portfolio with the new chip families for 4K security cameras named CV5S & CV52S. These chips can support multiple streams of 4K encoding and advanced AI processing. The company is positioning the CV5S security cameras with multiple sensors that provide 360-degree coverage and CV52S for single sensor security cameras that can offer better accuracy in detecting individuals or objects.

Likewise, Atlazo announced the launch of AZ-N1, its first-generation system-on-chip that includes its highly power-efficient AI and machine learning processor i.e. the Axon I. This is going to be useful for audio, vice, health monitoring, and sensor cases. A variety of products such as smart earbuds, hearing aids, and health monitoring devices are in the process to use AZ-N1.

At the same time, Mythic revealed Mythic AMP, an M1076 Analog Matrix Processor that can accomplish up to twenty-five trillion operations per second of AI compute performance. It needs ten times less power than GPU, which means it can perform in just a three-watt power envelope.

Moreover, an enterprise, Syntiant, is looking forward to launching NDP120 Neural Decision Processor which is expected to bring low power edge devices to the next level. This chip is useful for mobile phones, laptops, earbuds, smart wearables, smart speakers, security devices, and, smart home applications. It includes support for up to seven audio streams.

Furthermore, the emergence of autonomous robotics is creating lucrative opportunities for the AI chip industry players, which in turn, is boosting the growth of the global AI chip market to a great extent. Several economies, especially the U.S., have witnessed significant growth in tech AI start-ups in the past few years. Here, it is worth mentioning that with such continuous innovations by key market players, the global artificial intelligence chip market is definitely going to assemble huge prospects & exponential growth in the near future.

Suchita Gupta is an explorer, musician, and content writer. While pursuing MBA, she found that nothing satisfies her more than writing on miscellaneous domains. She is a writer by day, and a reader by night. Besides, she can be found entertaining her audience on social media platforms. Find her on LinkedIn & Instagram.