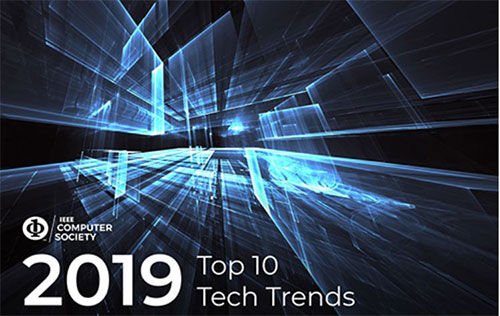 IEEE Computer Society (IEEE-CS) tech experts unveil their annual predictions for the future of tech, presenting what they believe will be the most widely adopted technology trends in 2019. This year, the experts also review additional technologies that have not yet reached broad adoption and will be revisited next year–such as digital twins–as well as technologies that have outpaced many others, including Kubernetes and Docker. The forecast by the world’s premier organization of computer professionals consistently ranks as one of its most anticipated announcements.

Dejan Milojicic, Hewlett Packard Enterprise Distinguished Technologist and IEEE Computer Society past president (2014), said, “In 2019 we expect to see ever-increasing adoption of deep learning accelerators in the areas of transportation, advanced security, and technologies for humanity. Fueled by advanced materials, adoption of virtual reality and the Internet of Bodies will stretch the future to new unknowns. We are excited about our predictions and the bets we have made for 2019’s technology trends.”

The top 10 technology trends predicted to reach adoption in 2019 are:

1. Deep learning accelerators such as GPUs, FPGAs, and more recently TPUs. More companies have been announcing plans to design their own accelerators, which are widely used in data centers. There is also an opportunity to deploy them at the edge, initially for inference and for limited training over time. This also includes accelerators for very low power devices. The development of these technologies will allow machine learning (or smart devices) to be used in many IoT devices and appliances.

2. Assisted transportation While the vision of fully autonomous, self-driving vehicles might still be a few years away, increasingly automated assistance is taking place in both personal and municipal (dedicated) vehicles. Assisted transportation is already very useful in terms of wide recognition and is paving the way for fully autonomous vehicles. This technology is highly dependent on deep learning accelerators (see #1) for video recognition.

3. The Internet of Bodies (IoB). IoT and self-monitoring technologies are moving closer to and even inside the human body. Consumers are comfortable with self-tracking using external devices (such as fitness trackers and smart glasses) and with playing games using augmented reality devices. Digital pills are entering mainstream medicine, and body-attached, implantable, and embedded IoB devices are also beginning to interact with sensors in the environment. These devices yield richer data that enable more interesting and useful applications, but also raise concerns about security, privacy, physical harm, and abuse.

4. Social credit algorithms. These algorithms use facial recognition and other advanced biometrics to identify a person and retrieve data about that person from social media and other digital profiles for the purpose of approval or denial of access to consumer products or social services. In our increasingly networked world, the combination of biometrics and blended social data streams can turn a brief observation into a judgment of whether a person is a good or bad risk or worthy of public social sanction. Some countries are reportedly already using social credit algorithms to assess loyalty to the state.

5. Advanced (smart) materials and devices. We believe novel and advanced materials and devices for sensors, actuators, and wireless communications, such as tunable glass, smart paper, and ingestible transmitters, will create an explosion of exciting applications in healthcare, packaging, appliances, and more. These technologies will also advance pervasive, ubiquitous, and immersive computing, such as the recent announcement of a cellular phone with a foldable screen. The use of such technologies will have a large impact in the way we perceive IoT devices and will lead to new usage models.

6. Active security protection. The traditional method of protecting computer systems involves the deployment of prevention mechanisms, such as anti-virus software. As attackers become more sophisticated, the effectiveness of protection mechanisms decreases as the cost increases. However, a new generation of security mechanisms is emerging that uses an active approach, such as hooks that can be activated when new types of attacks are exposed and machine-learning mechanisms to identify sophisticated attacks. Attacking the attacker is a technological possibility as well, but is almost always illegal.

7. Virtual reality (VR) and augmented reality (AR). These related technologies have been hitting the mainstream in some respects for a number of years. For a well-known example, Pokemon Go is a game that uses the camera of a smartphone to interpose fictional objects in real-world surroundings. Gaming is clearly a driver of these technologies, with other consumer devices becoming affordable and commonplace. VR and AR technologies are also useful for education, engineering, and other fields. However, there has been a Catch-22 in that there is a lack of applications resulting from the high cost of entry, yet the cost has stayed high due to a lack of applications. With advertisements for VR headsets appearing during prime-time television programs, we may have finally reached a tipping point.

8. Chatbots. These artificial intelligence (AI) programs simulate interactive human conversation using key pre-calculated user phrases and auditory or text-based signals. Chatbots have recently started to use self-created sentences in lieu of pre-calculated user phrases, providing better results. Chatbots are frequently used for basic customer service on social networking hubs and are often included in operating systems as intelligent virtual assistants. We have recently witnessed the use of chatbots as personal assistants capable of machine-to-machine communications as well. In fact, chatbots mimic humans so well that some countries are considering requiring chatbots to disclose that they are not human. Industry is looking to expand chatbot applications to interaction with cognitive-impaired children as a way to provide therapeutic support.

9. Automated voice spam (robocall) prevention. Spam phone calls are an ongoing problem of increasing sophistication, such as spoofing the caller ID number of the victim’s family and business associates. This is leading people to regularly ignore phone calls, creating risks such as true emergency calls going unanswered. However, emerging technology can now block spoofed caller ID and intercept questionable calls so the computer can ask questions of the caller to assess whether he or she is legitimate.

10. Technology for humanity (specifically machine learning). We are approaching the point where technology can help resolve societal issues. We predict that large-scale use of machine learning, robots, and drones will help improve agriculture, ease drought, ensure supply of food, and improve health in remote areas. Some of these activities have already started, but we predict an increase in adoption rate and the reporting of success stories in the next year. “Sensors everywhere” and advances in IoT and edge computing are major factors contributing to the adoption of this technology. Recent events, such as major fires and bridge collapses, are further accelerating the urgency to adopt monitoring technologies in fields like forests and smart roads.

Below are some of the technologies we considered very promising but felt that they will reach broad adoption after 2019. We will consider these technologies again next year.

11. Digital twins. These are software representations of assets and processes to understand, predict, and optimize performance for improved business outcomes. A digital twin can be a digital representation of any characteristic of a real entity, including humans. The choice of which characteristics are digitized is determined by the intended use of the twin. Digital twins are already being used by many companies: according to analysts, 48% of companies in the IoT space have already started adopting them. This includes digital twins for very complex entities, such as an entire smart city (for example, Digital Singapore). Digital twins are also expected to play a transformational role in healthcare over the next three years.

12. Real-time ray tracing. RT2 has long been considered the Holy Grail for rendering computer graphics realistically. Although the technique itself is quite mature, it was too compute-intensive to perform in real time until recently—so all ray-traced scenes had to be scripted and rendered in advance. In 2018, we witnessed the debut of a consumer product family with RT2 capabilities. In the next couple of years we expect to see incremental iterations until true RT2 is widespread. Initially, we expect the growth to be driven by consumer applications, such as gaming, followed by professional applications, such as training and simulation. Combined with #7 (VR), this technology could open up new frontiers in high-fidelity visual simulations.

13. Serverless computing. This is used to refer to the family of lambda-like offerings in the cloud, such as AWS Lambda, Google Cloud Functions, Azure Functions, or Nuclio. “Serverless” is the next step in the continuum along the line of virtualization, containers, and microservices. Unlike IaaS, in serverless computing the service provider manages the resources at a very fine granularity (all the way down to an individual function). End users can focus on the functions and don’t have to pre-allocate instances or containers or manage them explicitly. While it’s still at an early stage of adoption, there’s appeal on both sides (better resource utilization for the providers, and pay-for-what-you-use for the users), so we expect that it will pick up rapidly and we will start seeing significant adoption in the next couple of years.

Finally, we considered some technologies that we felt already reached broad adoption:

14. Kubernetes and Docker. Acceptance of Docker and Google’s decision to make Kubernetes open source inspired the wider open source community to stand behind these two technologies. This made Kubernetes one of the most popular open source projects in the last two years and the de facto standard for running containerized distributed applications on on-premises clusters and the public cloud. Kubernetes is already used in production by early adopters, with planned advances in security and reliability expected to attract further use by traditional enterprise companies. In 2019, we expect Kubernetes to be used in lieu of proprietary orchestration infrastructure for running big data processing and refactored open source code.

15. Edge computing. This is the conversion of IoT data to usable information using microprocessors collocated with the sensor, or at the edge of the network. Edge computing reduces network bandwidth, data storage, and analysis requirements. The price is increased power at the mobile device, requiring innovations in energy harvesting and storage. Innovations in edge computing will accelerate new developments across a wide array of applications.

At the end of 2019, we will review the predictions and determine how closely they match up to technology’s reality. Check back in December 2019 as we grade our 2019 predictions.