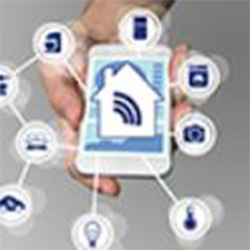 Home security has been an area of great interest among technology companies for several decades. But in the past five to seven years, new technology has taken this industry to unprecedented new heights: totally revolutionizing the gadgets, systems, and devices that protect homeowners from external threats.

The latest and greatest in this industry is smart-home security that automates an array of tasks and processes that previously could be handled only manually and in person.

Four Trends to Keep an Eye On

Millions of households have come to depend home security technology over the years to improve safety and the residents’ peace of mind. According to InMyArea.com, more than 90 percent of burglars say they would target a different home if they saw signs of a security system in place.

The data also shows that homes without a security system are three times more likely to be burglarized. In recognition of the huge demand for home security solutions, many tech firms have poured their smart-home R&D efforts into automated security solutions that are intuitive to use and cost-effective to maintain.

“Traditional home security alarm systems had a sole purpose: make loud noise so that the people in the vicinity are alerted of an intruder. As the technology advanced, new systems were built that would send out a signal or a code to a central monitoring station informing them of the location of the alarm so that the police could be dispatched,” Command One Security explains.

Unfortunately, traditional home security systems haven’t been as effective or reliable as they ought to be. But new innovations in the smart home space have paved the way for exciting trends that are more effective and reliable than in the past.

In 2019, you should watch for the following.

Research suggests that we’ll see a huge increase in the number of U.S. households that employ smart-home speakers and hubs over the next seven years. By one count, the penetration rate will increase from 23 million in 2018 to 34 million by 2025.

This will certainly nudge the smart home industry forward, but it’ll may introduce a number of new cybersecurity risks into homes as well. As matters currently stand, IoT devices are overwhelmingly weak on cybersecurity.

A savvy hacker in the wrong place at the wrong time can gain access to smart lights, thermostats, and other devices. It’s entirely possible that, left unprotected, smart-home speakers and hubs could become a viable entry point for cybercriminals — the burglars of the 21st century.

This will necessitate a sharper response from tech companies on cybersecurity features.

As artificial intelligence (AI) technology improves, we may expect significant advances in smart-home security authentication. Future security systems will move away from basic authentication practices (such as four-digit codes) and toward more secure alternatives.

Facial recognition, voice recognition, and fingerprints will become the wave of the future. They should make it nearly impossible for an intruder to enter your home undetected.

Security monitoring companies will also take advantage of smart-home hubs and video cameras to identify emergency calls swiftly and to detect the difference between an accidental alarm and a likely crime.

In single-family households, as well as in households where two parents work full time, latchkey children can face the greatest threats. Parents either don’t set the security system for fear of their children setting off false alarms, or the youngsters find it a challenge to play it safe because the systems are too complex.

Look for a greater emphasis on child-friendly features to evolve as the years pass.

At the moment, many smart-home features feel choppy and distinct. Though strides have been made in this area over the last couple of years, industry analysts expect there will be even greater integration in the coming months.

Gadgets will work better together to create a sophisticated and easily customized smart-home environment that’s both safe and readily intuitive.

The home security industry is nowhere near to achieving its full potential, but it has made significant strides over the past few years. As smart-home technology continues to respond to the home security niche, you can expect to see new innovations that are powerful, effective, and safer than ever before.