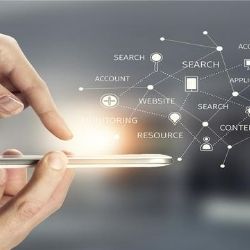 As humans, we appear to have an intrinsic desire to look into the future and predict how technology will evolve. While past visions of our present reality are often wonderfully over-ambitious, some of our predictions have come true over the decades, and in some instances, the predictions have manifested technological advancement themselves.

All this is to say predicting the future of technology is still a popular pastime, and nowhere are these predictions more enticing than in the world of smartphones. Over the past twenty or so years, smartphones have gone from a flashy business appendage to an indispensable tool owned by around half the world’s population. With the undeniable importance of the smartphone to modern technological societies, what does the future have in store for them?

As our current smartphones have generally adopted the same look it’s easy to forget that the hardware of mobile devices has changed significantly since their creation. There’s nothing to say the size and shape of smartphones won’t change again in the coming years, and how they change may actually look backwards to move forwards.

Take Samsung’s Galaxy F as an example. Touted as the first flexible smartphone device, their foldable design harkens back to the days of the flip phone, but now offering the benefits of portability and tablet functionality simultaneously. Samsung also has a patent out on an extendable smartphone display that achieves a similar function by a different design. Whether these ideas will be adopted on a larger scale is still to be seen.

How we mechanically interact with our technology is constantly evolving, either through individual experimentation or technological innovation, and that innovation is set to speed up in the future. Expect more experiments with voice and visual commands to make controlling your smartphone a more seamless part of your everyday life.

Simon Debav, a marketer at Boomessays and Paperfellows, points out that “gesture interactions are already common on various smartphone models, and it appears that all major smartphone manufacturers are currently investigating the potential of in-air gestures, reducing the need for a touch screen at all.”

Our smartphones are nothing without their connections, to the internet, other devices, even our charging stations. With advancements in networks and wireless technology, experts are predicting that the way in which our devices will connect may completely change in the coming years.

Craig Matthias, from the wireless networking advisory firm Farpoint Group, predicts physical ports will vanish from handsets in the not too distant future. We’ve seen the origins of this with Apple abandoning the headphone jack, and Matthias points to ever-improving wireless charging technology being the end of the charging jack.

Going even further, Dot Cotton, a lifestyle writer at Stateofwriting and Assignment Help, argues that connectivity may even change the way in which we use our devices. “Cloud storage and wireless connectivity are coming on in leaps and bounds, so I wouldn’t be surprised if the smartphone itself becomes a less important individual item and more like one of many nodes on a network.”

Following Cotton’s prediction, if all of your smart devices can access the exact same data at any time, anywhere, your information begins to exist between devices. You could forget your smartphone at home and rely on a smartwatch, or know all your data is readily available on your work computer. We’re already seeing the beginning of this and with the arrival of 5G these interconnected networks of access points will only become stronger.

These are only a few examples of potential advancements in smartphone technology, and the reality may well be impossible to predict. We might like to think we’re better at predicting the future than our ancestors, but I’m not sure how confident we can be.

While none of our current models are as ambitious as flying cars, we still necessarily depend on our current technology, and there’s nothing to say our capabilities won’t massively change within ten or even five years. All we can do is follow in the footsteps of Star Trek: envision the future technologies we want to happen, and direct our resources to make those dreams a reality.

Katherine Rundell is a writer at UKWritings review and Research Paper Writing Service. She has been coding for over a decade and listens to podcasts when she escapes the office at the weekends to hike and camp in the wilderness.  Also, she is a tutor at Essayroo.