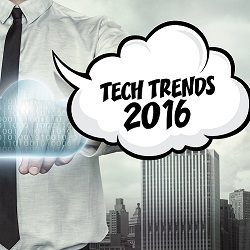 The IEEE Computer Society has unveiled its Top 9 Technology Trends for 2016. According to Dejan Milojicic, past president, IEEE Computer Society, “Some of these trends will come to fruition in 2016, while others reach critical points in development during this year. You’ll notice that all of the trends interlock, many of them depending on the advancement of other technologies in order to move forward. Cloud needs network functional virtualization, 5G requires cloud, containers can’t thrive without advances in security, everything depends on data science, and so on. It’s an exciting time for technology and IEEE Computer Society is on the leading edge of the most important and potentially disruptive technology trends.” The nine technology trends to watch in 2016 are –

7.5 Gbps according to Samsung’s latest tests – 5G is the real-time promise of the future. Enabling everything from interactive automobiles and super gaming to the industrial Internet of Things, 5G will take wireless to the future and beyond, preparing for the rapidly approaching day when everything, including the kitchen sink, might be connected to a network, both local and the Internet.

After many years of being questioned by both technologists and the public, Virtual Reality has now permeated both the consumer marketplace and the world of industry.

2016 promises to be the tipping point, as VR technologies reach a critical mass of functionality, reliability, ease of use, affordability, and availability. Movie studios are partnering with VR vendors to bring content to market. News organizations are similarly working with VR companies to bring immersive experiences of news directly into the home, including live events. And the stage is set for broad adoption of VR beyond entertainment and gaming – to the day when VR will help change the physical interface between man and machine, propelling a world so far only envisioned in science fiction. At the same time, the use of augmented reality (AR) is expanding. Whereas VR replaces the actual physical world, AR is a live direct or indirect view of a physical, real-world environment whose elements are augmented (or supplemented) by computer-generated sensory input such as sound, video, graphics or GPS data. With the help of advanced AR technology (e.g., adding computer vision and object recognition), the information about the surrounding real world of the user becomes interactive and can be manipulated digitally.

While nonvolatile memory sounds like a topic only of interest to tech geeks, it is actually huge for every person in the world who uses technology of any kind.

As we become exponentially more connected, people need and use more and more memory. Nonvolatile memory, which is computer memory that retrieves information even after being turned off and back on, has been used for secondary storage due to issues of cost, performance, and write endurance, as compared to volatile RAM memory that has been used as primary storage. In 2016, huge strides will be made in the development of new forms of nonvolatile memory, which promise to let a hungry world store more data at less cost, using significantly less power. This will literally change the landscape of computing, allowing smaller devices to store more data and large devices to store huge amounts of information.

Also used as the Internet of Things (IoT), CPS are smart systems that have cyber technologies, both hardware and software, deeply embedded in and interacting with physical components, and sensing and changing the state of the real world.

These systems have to operate with high levels of reliability, safety, security, and usability since they must meet the rapidly growing demand for applications such as the smart grid, the next generation air transportation system, intelligent transportation systems, smart medical technologies, smart buildings, and smart manufacturing. 2016 will be another milestone year in the development of these critical systems, which while currently being employed on a modest scale, don’t come close to meeting the demand.

A few years ago, Harvard Business Review called data scientist the “sexiest job of the 21st century.” That definition goes double in 2016.

Technically, data science is an interdisciplinary field about processes and systems to extract knowledge or insights from data in various forms, either structured or unstructured, which is a continuation of some of the data analysis fields such as statistics, data mining, and predictive analytics. In less technical terms, a data scientist is an individual with the curiosity and training to extract meaning from big data, determining trends, buying insights, connections, patterns, and more. Frequently, data scientists are mathematics and statistics experts. Sometimes, they’re more generalists, other times they are software engineers. Regardless, people looking for assured employment in 2016 and way beyond should seek out these opportunities since the world can’t begin to get all the data scientists it needs to extract meaning from the massive amounts of data available that will make our world safer, more efficient, and more enjoyable.

The greatest single problem of every company and virtually every individual in this cyber world is security.

The number of hacks rises exponentially every year and no one’s data is safe. Finding a “better way” in the security world is golden. Hardware capability-based security, while hardly a household name, may be a significant weapon in the security arsenal of programmers, providing more data security for everyone. Capability-based security will provide a finer grain protection and defend against many of the attacks that today are successful.

Impacting everything from game playing and online advertising to brain/machine interfaces and medical diagnosis, machine learning explores the construction of algorithms that can learn from and make predictions on data.

Rather than following strict program guidelines, machine learning systems build a model based on examples and then make predictions and decisions based on data. They “learn.”

More and more, the world depends on cloud services.

Due to limitations in technology security, these services have not been widely provided by telecommunications companies – which is a loss for the consumer. NFV is an emerging technology which provides a virtualized infrastructure on which next-generation cloud services depend. With NFV, cloud services will be provided to users at a greatly reduced price, with greater convenience and reliability by telecommunications companies with their standard communication services. NFV will make great strides in 2016.

For companies moving applications to the cloud, containers represent a smarter and more economical way to make this move.

Containers allow companies to develop and deliver applications faster, and more efficiently. This is a boon to consumers, who want their apps fast. Containers provide the necessary computing resources to run an application as if it is the only application running in the operating system – in other words, with a guarantee of no conflicts with other application containers running on the same machine. While containers can deliver many benefits, the gating item is security, which must be improved to make the promise of containers a reality. We expect containers to become enterprise-ready in 2016.

Gets a B+ Capability-based Security Lags Behind 2016 Predictions