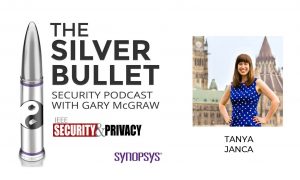 Tanya Janca is a senior cloud advocate at Microsoft, where she specializes in software security. Her job involves evangelizing software security and advocating for developers through public speaking. She is also a leader in the OWASP DevSlop project and believes in hands-on teaching via workshops and real technical examples. As an ethical hacker, OWASP project and chapter leader, software developer, and professional geek of 20 years, Tanya is fascinated by the “science” in computer science. Previously, she worked as the IT security coordinator for the 42nd general election in Canada. Tanya is also an avid gardener and has been the frontwoman of multiple bands. She holds a computer science diploma from Algonquin College and currently lives in Ottawa.

Listen as Gary and Tanya discuss the transition from development to security, election security, DevOps, and more.