(The article below was taken from a New York Times article that appeared online July 12, 2019.)

Fernando Corbató, whose work on computer time-sharing in the 1960s helped pave the way for the personal computer, as well as the computer password, died July 12 at a nursing home in Newburyport, Massachusetts. He was 93.

His wife, Emily Corbató, said the cause was complications of diabetes. At his death, he was a professor emeritus at the Massachusetts Institute of Technology. 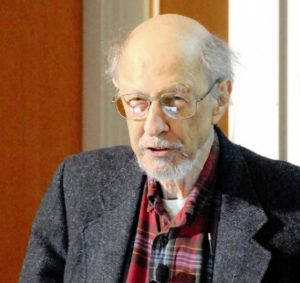 Corbató, who spent his entire career at MIT, oversaw a project in the early 1960s called the Compatible Time-Sharing System, or CTSS, which allowed multiple users in different locations to access a single computer simultaneously through telephone lines.

At the time, computing was done in large batches, and users typically had to wait until the next day to get the results of a computation.

In a 1963 public television interview, Corbató described batch processing as “infuriating” for its inefficiency. The advent of time-sharing, however, reinforced the notion, still in its infancy, that computers could be used interactively. It was an idea that would animate the computing field for decades.

“Long before personal computers made it possible for each person to have a computer, time-sharing transformed the way people used computers,” said Stephen Crocker, a computer scientist and internet pioneer who worked on time-sharing systems.

Corbató explained his time-sharing methods in the 1963 interview, with the reporter John Fitch, broadcast as part of the WGBH series “MIT Science Reporter.” In place of an actual bulky computer of the day, he used a modified electric typewriter mounted on a box of electronics.

Computers, he said on the program, were so expensive to use that any idle time was a huge waste. But with time-sharing, computer time was carefully metered and wasted time all but eliminated.

The computer could carry out only one operation at a time, by means of a supervisor program. Yet it worked so quickly that it could skip from one job to another, with users never noticing any lag.

Each user “would be able to create and modify and execute programs interactively, as if he or she had sole control of the computer,” science writer M. Mitchell Waldrop wrote in “The Dream Machine,” his 2001 book on the personal computing visionary J.C.R. Licklider.

In the WGBH interview, Corbató likened the supervisor program to a chess master playing against many opponents at once, letting them ponder their next moves while the master raced from board to board.

When Corbató was overseeing the CTSS project, computers were considered little more than giant calculators. But when his team demonstrated the new system in late 1962, that view was beginning to change.

“To this day I can still remember people only realizing when they saw a real demo: ‘Hey, it talks back. Wow! You just type that and you got an answer,’” he said in a 1989 interview with the Charles Babbage Institute at the University of Minnesota, an archive and research center specializing in information technology.

CTSS gave rise to a successor project called Multics, which Corbató also led. He told the Babbage Institute, “Multics started out as kind of a wishlist of what we would like to see in a big computer system that might be made as a commercial model.”

Multics was a collaboration among MIT, AT&T’s Bell Laboratories and General Electric. It failed as a commercial endeavor, but it inspired a team of computer scientists at Bell Labs to create Unix, a computer operating system that took root in the 1970s and was adopted widely in the ′80s and ′90s.

Fernando José Corbató was born on July 1, 1926, in Oakland, California, to Hermenegildo and Charlotte (Carella Jensen) Corbató. His father, a native of Villarreal, Spain, was a professor of Spanish literature. When he joined the faculty of the University of California, Los Angeles, in 1930, the family moved south.