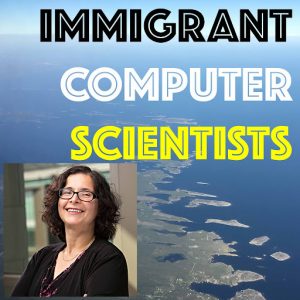 Being female helped (in studying Math and Science in Brazil)… most of my male cousins would go to high school in the evening because they had a job.”

“When I came to the United States for the first time, I probably had 70 people who took me to the airport!”
– Dilma da Silva (Co-founder of “Latinas in Computing”, Professor and former CSE Department Head Texas A&M, IBM Researcher for over a decade, former Professor in Brazil)

Episode 7! If you are trying to decide between academia vs. industry, her advice could pivot your career! While she spent over a decade in industry, she never paid attention to the stock price and always felt like a teacher at heart. So she left the industry to return to academia, and become the Department Head of CSE Dept. at Texas A&M University. She co-founded the national group “Latinas in Computing”. Wow!
Dilma da Silva has unique perspectives on both US academia and US industry, having spent significant time in both. (She’s also been a Professor in Brazil and a Professor in the US.)

Have you heard of the “minority tax”? Dilma da Silva believes it is harder (on under-represented researchers) in academia than in industry.

Hispanic Heritage Month runs from 15 September to 15 October 2021. This podcast is celebrating it by featuring the above 3 Latin/Hispanic Computer Scientists in Episodes 5-8.

The guide for this episode and more information about the three narrators is available at the podcast website: http://csimmigrant.org/