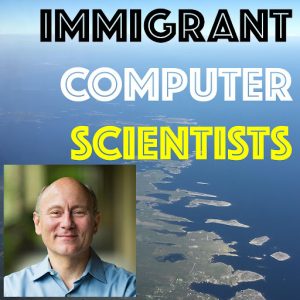 “Remember we’re talking 1975 in Brazil, third world country, and the computer was an IBM 1130, that we programmed by punched cards.” – Henrique “Rico” Malvar

Episode 6! His advice could change your life! With Former Director of Microsoft Research (currently Distinguished Engineer). He’s also a US National Academy of Engineering (NAE) Member, IEEE Fellow, and a Former Professor in Brazil.

Have you ever used a computer with a Punched Card? Want to know what it feels like? Also, he grew up under the Brazil military rule/dictatorship, in a household with 2 Professors as parents, then went on to become a professor himself. How did he move from academia into the US industry, and rise to become the Director of the entire Microsoft Research Labs? Listen to Rico Malvar’s journey and the perspectives. His advice could change your life!

Hispanic Heritage Month runs from 15 September to 15 October  2021. This podcast is celebrating it by featuring Latin/Hispanic Computer Scientists in Episodes 5-8.

The guide for this episode and more information about the three narrators is available at the podcast website: http://csimmigrant.org/