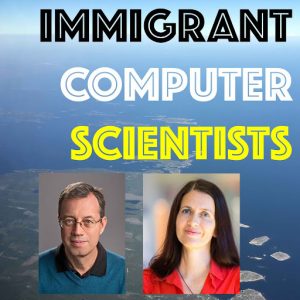 Today’s two guests are famous in their own fields – Systems and NLP respectively:

This episode is timely — A lot of these issues have again become relevant today, given the latest moves in East Europe, where events are attempting to return us to the way the Soviet Republics operated in the late 1900s. A few topics and questions covered in this episode:

What was it like growing up poor in a Soviet satellite country (i.e. Communist Romania) in the 1970s and 1980s under the infamous dictator Nicolae Ceaușescu, when “folders” were maintained on families?

What was the tech industry like in the 1970s-1990s in Romania? Hear about “clone” computers that were invented in Romania. What was the secret to success in school? (hint: Exams, Exams, Exams). What was it like to do “pen and paper” Computer Science, without access to computers?

How did our two guests rise from these incidents to become two of the most famous Professors today?

This is the 1st of 3 episodes focused on Romania.