Episode 1 | From A Country That No Longer Exists 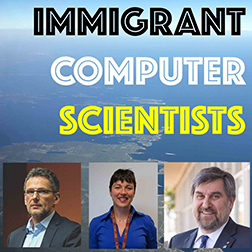 In this first episode of the Immigrant Computer Scientists podcast we travel back a few decades, to the 1980s and 1990s. To a country that no longer exists in 2021. This episode features oral history immigration stories narrated by two Professors of Computer Science, and a Distinguished Technologist in Tech Industry. They include two IEEE Fellows. Our narrators in this episode are: Nenad Medvidovic (IEEE Fellow, Professor at USC), Jelena Mirkovic (Research Professor at USC), and Dejan Milojicic (IEEE Fellow, Distinguished Technologist at HP Labs). All of these three computer scientists were immigrants from Yugoslavia in the 1980s and 1990s, a country that subsequently broke up in the late 1990s/2000s.

This podcast episode touches on school education and university in Yugoslavia for two of them and schooling/university in US for one of them, science/math/computer education, reasons for immigrating, their first encounters with computing, adapting after immigration especially cultural differences, and so much more! These accessible episodes also feature tremendous advice and discussion around topics concerning everyone in the community, e.g., handling failures and rejections, impostor syndrome, etc. Episode 1 is a lead episode and contains excerpts from the three interviews. The upcoming Episodes 2-4 present the full oral history interviews with these individual Computer Scientists. These oral history interviews are not intended to be a representative sample — they are the personal immigration stories of 3 prominent Computer Scientists who immigrated from Yugoslavia.

The guide for this episode, and more information about the three narrators is available at the podcast website: http://csimmigrant.org/