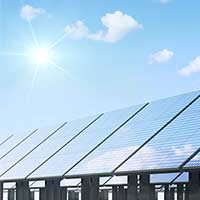 Growing components of our global energy ecosystem, renewable energy sources generated approximately 23 percent of total worldwide electricity in 2015, according to the International Energy Agency. After hydro- and wind power, solar power — or photovoltaic (PV) energy — is the third-largest renewable energy source. According to SolarPower Europe, PV energy is helping power 25 million homes in Europe and is becoming increasingly cost-competitive worldwide. Beyond widespread employment in vehicles, homes, power plants, and satellites, PV energy is also increasingly being adopted as a form of investment—in which the economic benefit to investors is the most important aspect.

Historically, relatively low efficiency in PV cell energy conversion (for both silicon-based and non-silicon-based cells) has been the biggest hindrance to the economic benefits of PV systems. In fact, the conversion efficiency of current commercially available silicon-based PV cells is still limited to around 14 to 22 percent. However, recent studies have shown that PV system faults might also greatly reduce the power that systems deliver, with significant negative effects on reliability — specifically, system lifetime and maintenance costs. The articles and videos in this January 2017 Computing Now theme explore the problems associated with PV system reliability, as well as some approaches for mitigating them.

While they range from a couple rooftop panels (with a kilowatt capacity) to utility-scale solar parks (with a megawatt capacity), all grid-connected PV systems contain these components and function similarly.

Recognizing the need to increase PV system reliability, academic researchers and industry leaders are increasingly devoted to analyzing and modeling PV system faults and their effects on efficiency, as well as to developing techniques to detect and tolerate such faults.

The most critical components for reliability are the MPPT and the inverter(s). PV arrays are the most reliable element of PV systems, with a current lifetime of more than 20 years, compared to less than 15 years for MPPTs and inverters. Yet, PV arrays can still be affected by some kinds of faults, such as wire corrosion, cell cracks, and partial shading (from nearby buildings, bird droppings, and so on). In fact, because shaded cells generate lower currents than non-shaded cells, the shaded cells become reverse-biased and dissipate power as heat, resulting in localized temperature increases (or hot spots) that could permanently damage the shaded cells and reduce the PV system’s efficiency.

The first article is “Faults Affecting the Control Blocks of PV Arrays and Techniques for Their Concurrent Detection,” which I co-authored with Cecilia Metra, Fabrizio Lombardi, Daniele Rossi, and Giacomo Collepalumbo. We first analyze the impact of the most common MPPT and inverter faults on PV system power efficiency. Our analysis shows that these faults produce catastrophic efficiency reductions (higher than 80 percent in some cases). Not only do these faults have a significant impact on efficiency, they also induce a significant distortion of the voltage (and current) waveforms at the input and output of control blocks. We then present a low-cost approach for concurrent fault detection, which can be combined with proper reconfiguration schemes to avoid detrimental effects on PV system efficiency.

In “Designing Fault-Tolerant Photovoltaic Systems,” Xue Lin and his colleagues present a reconfigurable PV array that minimizes PV cell fault impacts on the total power that the array generates. The proposed solution detects faulty PV cells within the array by periodically comparing the actual generated power with that expected for a fault-free array under the same environmental operating conditions. If the powers differ, fault-detecting and fault-bypassing mechanisms initiate, which determine the optimal way to interconnect the remaining fault-free cells to maximize the electrical power that the array can generate.

Sergiu Dotenco and his colleagues’ “Automatic Detection and Analysis of Photovoltaic Modules in Aerial Infrared Imagery” proposes a technique for automatically detecting malfunctioning PV cells within large PV arrays. The presented algorithm uses drone-captured, aerial infrared low-resolution images of PV power plants to automatically detect major temperature abnormalities in PV cells, which are often caused by cell defects. The method is based on the fact that overheated PV cells emit considerably higher infrared radiation than those operating normally. The algorithm computes the median temperature of a cell in the array, compares it with a reference Gaussian temperature distribution expected for a fault-free cell, uses two statistical outlier tests to identify whether the cell’s temperature is significantly higher than expected, and finally, classifies it as defective or normal.

“Reconfiguration of Photovoltaic Arrays Based on a GPU-Accelerated Exhaustive Search Algorithm” proposes an algorithm for efficient, real-time reconfiguration of PV arrays, with the goal of mitigating power losses caused by partial shading. Authors Juan Ramon Camarillo-Peñaranda, Daniel Gonzalez Montoya, and Carlos Andres Ramos-Paja explain that the algorithm monitors parameters such as current and voltage for each PV array in the system, calculates the power that each possible configuration can generate, and then adopts the best configuration. The authors assert that their methodology enables a power increase of approximately 22 percent during daylight. In anticipation of the high computation time required for systems with a high number of PV arrays, the algorithm runs on commercial GPUs, rather than classical CPUs, thus enabling parallel arithmetic computations.

Finally, in “Let the Sun Shine,” Greg Byrd presents an approach called Project Sol, which would allow PV array owners to know, in real time, the solar irradiation present at an array’s location. The owners could use the information to easily determine, at any time, if the PV array is generating enough power to run a specific load, or if they need additional power from the grid to compensate for a lack of sunlight. The approach uses inexpensive network-connected sensors (connected through a wireless network) that send the radiation data to a cloud-based database. Database subscribers can monitor and react to current irradiation conditions, as well as predict future energy production.

This month’s theme also includes two videos by experts in the field, which provide deeper technical insight into PV systems and their reliability challenges. In the first video, Gianni Borelli from Becar, Beghelli Group in Italy discusses the potential and challenges of concentrator photovoltaics (CPV), which use lenses or mirrors to concentrate sunlight onto tiny multi-junction PV cells and can easily achieve 30-percent energy conversion efficiency.

While PV cell efficiency is still central to improving solar energy’s economic attractiveness and viability, PV system fault mitigation is also an important factor we must address. I hope this issue of Computing Now serves as a resource highlighting the major challenges related to PV system reliability, as well as stimulates further research in the field.

Martin Omaña is a contract professor of electronics and a senior research fellow at the University of Bologna, Italy, from which he received a PhD in electronic engineering and computer science in 2005. He has coauthored several papers published in peer-reviewed journals and international conference proceedings. His research interests include design for testability of high-performance systems, fault modelling, soft errors, aging phenomena, design of reliable and error-resilient systems, hardware reconfiguration strategies, in-field diagnosis, on-chip monitoring approaches, and green energy. Omaña is a member of the Computing Now advisory board. Contact him at martin.omana@unibo.it.